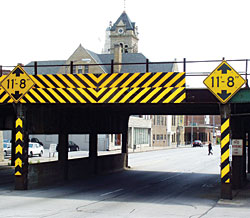 Please note that the above photo is not of the sign I discuss below. I sadly do not have a photo of the low clearance sign in question. And the one I'm talking about is not attached to any overpass. But it is bright and obvious-looking so it boggles my mind how anyone could possibly miss it.

(This post has been updated at the end!)
When I still lived in the states, I remember seeing signs as you'd pass under a bridge or large overhead signage that spanned the highway that would announce the clearance. For the average person who's just driving a car, this information really doesn't matter. OF COURSE your little sedan or even gas-guzzling SUV will fit underneath just fine. It's people that drive buses and trucks for a living. Those folks need to know the dimensions of the vehicles they're driving. It's their job.

Over here, we have those kinds of signs too. The only differences are that here, it's in metric measurements. That, and no one seems to regard them.

On the main road by our house, they've been doing a lot of construction work for the subway. There are big sheets of metal draped over places in the road where they have needed frequent access to the underground. That's nothing new. But what is fascinating is that they have erected this temporary signage above the entire road except for the right lane, which is for larger vehicles such as trucks or buses. It's very low and it has a sign in Chinese coupled with a "2.5m" sign indicating the height, coupled with a big picture of a truck with an "x" over it. It also has flashing lights on it. It's very clear to me that if you're driving a large truck or a bus, you need to get out of that lane and into the right one. And if it's very clear to me, even though I cannot read Chinese but for about 100 characters or so of it, then it should be perfectly clear to the Chinese people here, right? Right?

According to my husband, he read in the online edition of Qingdao's newspaper that this particular sign has been knocked down by trucks or buses...get ready for this...OVER 50 TIMES IN ONE YEAR. Yes, really. In the span of just 365 days, the same over-the-road low clearance sign has been crashed into by negligent drivers of vehicles that are in excess of 2.5 meters. In some instances, it was run into slowly. In others, it was completely plowed down. Let's just say for argument's sake that you drive a cement mixer and you have never before been on this road. If you can see the sign easily in a car, imagine seeing it in a truck, which is further up from the ground. It seems nearly impossible to miss it. How in the world is it that people driving trucks and buses here have hit this fucking thing over 50 times?!? I know this shit happens back home too but not 50 times in one year in the same fucking place. This is like a whole new level of stupid. At least my in-laws now look smart in comparison. Then again, they can't drive. I shudder to think how many more times this poor sign would have been crunched into the road with either one of them behind the wheel. Gah!

Updated! 1/31/2013
Yesterday, as my husband and I were driving home from Raelynn's Wednesday play group, I looked up and realized we'd been caught at the light where the infamous sign of doom is located. I gleefully groped for my camera and I am happy to present to you all a photo of the actual sign that prompted this post. Here it is! 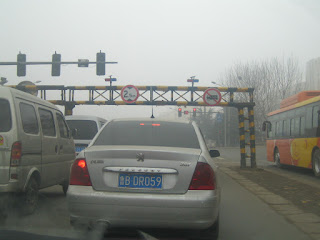 I apologize for saying there was a Chinese sign on here. There is on the other side of the road for the traffic going the opposite direction. Which begs the question: why would you only put that for one direction of traffic? Just sayin'! Now that you can see the sign for yourselves, what do you think? Is it obvious enough to you? Or would you hit that shit too?

Email ThisBlogThis!Share to TwitterShare to FacebookShare to Pinterest
Labels: Only In China, Qingdao, Stupid People