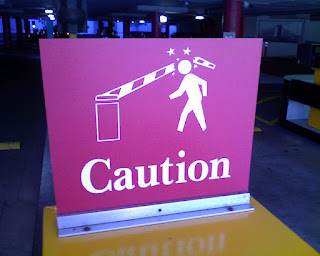 Last semester, I had the pleasure of having a wonderfully-behaved and absolutely adorable little boy named Ron in my kindergarten class. He was very smart too and was one of my top readers. But Ron was the most accident-prone kid in the whole bunch. According to school rules, if a student injures him or herself in your class, you have to call their parents to inform them of the incident. One day during snack time, the boys were horsing around in typical boy fashion. I told them to stop running about at once. But no sooner than I'd told them, while I attended to some of the other children, Ron, who had been crawling under the tables, wanged his head so hard on one of them that he actually yelped, "Ouch!"

I took him to the nurse and was told that Ron would be just fine, despite a sizable bump on his little head. Now I had to call the mom. I was nervous, I'll admit that. Korean moms can be a bit tricky to deal with. Ron's mom's English level is pretty good so she's relatively easy to speak to. Still, I worried she'd be angry with me, despite my having warned the children about horseplay. But our conversation went just fine. And then, about 2 weeks later, Ron hit his head AGAIN. This time, I had no idea he'd done so. I found out from my Korean teacher during lunch. She told me I had to call his mom. Oh boy. This woman was going to start thinking I was beating her son. So, AGAIN, I call her and inform her of Ron and his head bumping, even though I had no idea it had occurred.

Then, there was a lovely period of time where Ron in all his cuteness did not injure himself in my class. Also, he went to Korea with his family for 2 weeks. And then, a week after he'd returned, I took the children out to the playground. And as the words "Look out!" escaped my lips, Ron bashed his head into the underside of the slide. Yet another big bump. Yet another trip to the nurse. And yet another phone call to the mom who, by now, took to answering my calls with, "Hi Teacher. What's wrong with Ron now?" At least she wasn't surprised. And judging from the frequency he'd injure himself, I'm sure she was used to him getting hurt.

And then, there's Justin. Justin is Ron's little brother. They look just alike though Justin looks smaller. I always want to call him "Small Ron." Last semester, Justin, in his own class (and thankfully while his own mother was present) fell and hit his head. He had to get stitches too. I was so grateful that Ron had never injured himself to that extent. God, that would be a horrible phone call to make! This semester, Justin is one of my children. He's just like his brother too in that he is cute as a button, well-behaved and clever. Unfortunately, if today is any indicator, he also gets injured just as much as his brother as well.

Somehow, between the short walk from the school lobby out to the school bus, Justin had cut his finger. It was bleeding, quite a bit actually. "Teacher! Look!" he told me. "Oh no!" I'd said as we got out to the bus. I realized I couldn't just stick him on there like that. I waved down one of the Korean teachers for some help. Once I was sure he was ok, I walked down the street, hailed a cab and went on my way.

Only it wasn't over yet. Oh no. Christina, my Korean teacher, called me while I was still in the taxi. She told me I had to call Ron/Justin's mom to inform her about the injury even though it wasn't even in my class. Oh, just like old times only different child. I love my Korean assistant but sometimes I have to wonder about her. I asked her to text me the phone number and she seemed surprised I didn't have it. Why would I take home the phone numbers? Hmmm...maybe it's a Korean thing.

Ron/Justin's mom didn't seem angry but the tone in her voice suggested she knew we'd have many more of these unfortunate phone conversations down the road. I always hate calling the parents of my students because most of them can't really speak English so talking to them is really difficult. I have to talk even more slowly than I do to the students themselves and most of them giggle so much it is hard not to laugh at them. In case you don't know, Koreans (and all Asians really) will giggle and laugh when they are embarrassed. So since most of them can't speak English well, they start laughing away because they feel ashamed.

After today, I'm thinking of referring to Ron, Justin and their parents as "The Ouch Family." It certainly seems fitting. Though at least Ron/Justin's mom isn't angry about Justin's injury. I know this because a short while ago, my phone rang. And as I said, "Hello?" I was suddenly greeted by a tiny little voice. "Hi Teacher. This is Justin." I could also hear a certain mom in the background coaching her little boy on what to say. "I am ok. I wanted to tell you not to worry about me," he continues. Jeremy looked over with an amused face as he realized I was on the phone with one of my students. It was so hard not to burst into laughter from the sheer adorableness of the situation. I told Justin I was so happy to hear he was ok. And when I looked up at the clock and saw what time it was (just before 9pm), I told him he should make sure to go to bed and get plenty of sleep. The mom feeding him lines in the background was the icing on the cake of cute. Hopefully The Ouch Family keeps healthy and ouch-free, especially in my presence.
Posted by JQ at 6:25 AM