No, Dear Husband, No!

Apparently, MIL's lack of fashion sense is contagious, infecting my normally sensible and decently dressed husband. Jeremy decided that he would actually leave the house in this: 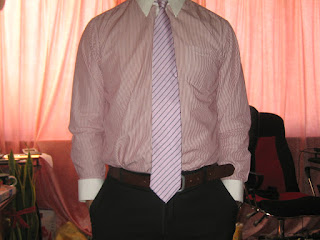 Oh Honey, no. I begged him not to go out in public looking like this. I pulled out other shirts and ties. I blocked his path to the door. But Jeremy would not listen and went out to make insurance sales in this outfit. Thankfully, he did make a sale but I attribute that to the quality of ING's insurance and my husband's knowledge of it, coupled with the fact that people here just don't know how to fucking dress themselves.

Let's look at the more zoomed photo, shall we? 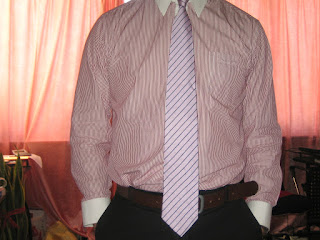 First, this shirt. THIS FUCKING SHIRT. God, he's had this since before we got married, which is no big deal except that I had nothing to do with it arriving in his wardrobe. I have told him it's hideous. I mean, it looks like Ronald McDonald's dress shirt, assuming he has one. And if he does, clearly it has gone missing and resurfaced in my husband's closet. If Jeremy's feet were really small, he could totally borrow Raelynn's ridiculous red shoes that MIL bought her to go with it. So yeah, I hate this shirt and have never kept that a secret. I love Jeremy. He's so handsome. He should be wearing something that flatters him.

Now let's talk tie. I actually bought him this tie in Seoul. It is a nice tie. The problem, as we identified before, is the shirt. I can't believe he thought pairing this tie with that horrible shirt was a good idea. Then again, he's wearing that shiteous brown belt with black slacks. And black shoes. At least the shoes are nice ones. But still! Oh come on Jeremy! I know you can dress yourself better than this. When Raelynn is a teenager, you know she will totally pretend she doesn't know him if he even tries to dress like this. And of course, so will I!
Posted by JQ at 3:05 AM