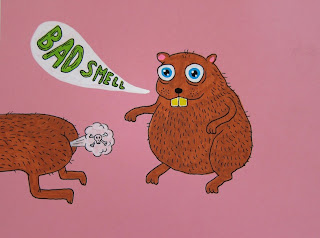 This morning while Jeremy played soccer in the subzero temperatures outdoors, I disinfected our kitchen further (click here to see why). He'd almost completely restored order to it and I would have been furious that he'd left more crap for me to clean up from his dolt of a mother, but he also made breakfast for Raelynn while he cleaned up so I let it slide. I was just enjoying the freshness and cleanliness of the kitchen, as well as our couple of other rooms, when my husband returned from his game. We buzzed around the house, talking Christmas, and decided it would be a fine time to head over to Metro to get all the crap I'd need to prepare for our feast on Christmas day. Since I had to work on Thanksgiving, I couldn't really go all out. But we have off for Christmas so it's a go.

As we were preparing to leave, Jeremy's phone rang. It was the trolls. They told him they had some mantou (that barfy, flavorless Chinese bread that I hate unless I dress it up with butter or fry it or use it as the base for a makeshift pizza) and fried fish for us. I could hear him telling them we were on our way to the supermarket but then I heard him telling them we'd come by. Ugh. Seriously?

Jeremy smiles that winning smile and declares we've got to stop over there before going shopping. "We'll just stay for 10 minutes," he promises. But I know he's lying. Not intentionally, mind you. I just know he wants to make me happy and leave quickly but it won't be like that. I couldn't possibly be that lucky.

I've mentioned before how much I hate going to my in-laws' house. I totally hate it there. It is so boring. THEY are so boring. Drinking is the only thing that makes it tolerable but I couldn't justify it on such a short visit when we weren't even staying for a meal.

But beyond that, one of the worst things about their home is the smell. It doesn't help that I have been extra sensitive to all smells good and bad lately. And their home has a bad smell. Very bad. Let me attempt to describe it so you understand why it's so unbearable. Close your eyes and imagine the smell of old dirty shoes with a bit of foot stink to them combined with greasy, oily fried fish smell mingling with old man soap that has been pickled. Yes, that sums it up. It smells just like that. And I can't get used to it the entire time I'm trapped in their lair.

And a place that is that smelly is definitely dirty. You've seen the kitchen there so just imagine the rest of the place. While it's certainly not as cluttered up as the kitchen, I noticed in one bedroom today, they had clothes piled in the chairs. I should mention that they HAVE a wardrobe in each of the 2 bedrooms AND they have a chest of drawers in there too. Sigh. What bothers me most about the filth there is the floors are so nasty that my daughter's socks were visibly grungy from running around in there. And her off-white jeans she wore today? She looked like she'd been rolling in the dirt outside when we left there.

In total, we endured 35 minutes of boredom where I was forced to eat a fucking luo bo and drink some tea (the tea I didn't mind) while Trollzilla herself insisted we stay longer so she could feed my kid some greasy fish crap and mantou. I know Raelynn is half Chinese but I cannot even fathom how she finds some of that shit to be edible. Of course, after this ordeal, it was now 1pm and we were running short on shopping time before Raelynn would throw a fit out of pure exhaustion and need for a nap. That need to sleep coupled with her idiot grandparents spoiling her in all the wrong ways is EXACTLY why my kid acted like a total brat at the store. I worked so hard with her over the summer to get her to behave and these two birdbrains messed it all up. I've got my work cut out for me this winter when I get to correct her behavior without them interfering and setting me back every single day while I potty train her. I can take her with me to my school next semester, which starts in March and I really want it to happen just because I don't want her to be stuck with my in-laws all the time. I definitely need a Christmas miracle here. Due to this torture, I hope my husband is aware that he now owes me some more jewelry. Or at the very least, a full-time maid.
Posted by JQ at 6:10 AM