Too Cold For School 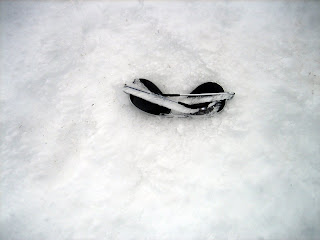 I found this image on Google's Picasa Web album when I did a search for "it's too cold." This sums it up fairly well. I didn't want to use a photo of the students mentioned below to keep them anonymous.


One day last week, before the children had arrived at school, I heard my Korean teacher, Christina, on the phone with one of the moms. Iris's mom. I listened intently, trying to piece together what she was saying with my elementary Korean skills. All I could determine was that she was calling in. AGAIN.

Of all my students, Iris has been absent the most. BY FAR. Her mom always has the most asinine excuses for not bringing her too. I should add that her mother drives her to school. I'm not quite sure what part of the city they live in, but you'd think if it was too much for you to bring your child to school, you'd make arrangements for the bus to pick her up.

Iris is a really cute little girl but she's kind of bratty. I say this with absolute love. The kid can be bribed with lollipops and she's smart. She does a good job, when she feels like it that is. How can I blame her when her mother teaches her to have this kind of attitude toward school?

Her mom has called in for Iris with the following excuses:
1) Sick.
Iris has been sick quite a few times. I can't fault her for this one. Children are full of germs. Ack! Ick! Oog! If she's sick, she should totally stay as far away from me as possible.

2) The mom (and not Iris) is sick.
She's called in for this reason at least 5 times that I can recall. I'm sorry, but with a little pistol like Iris running around, wouldn't you feel better if you could just rest while she went off to school? She's 6 years old. I have no idea how having your demanding daughter whining at you all day would make you feel better, but whatever.

3) Waiting for a repairman.
She only used this one once. Again, you could really benefit from putting your child on the bus! It just goes to show parents will make the lamest excuses for their kids.

And finally, my absolute favorite excuse. EVER. Drumroll please!
4) It's too cold out.
Did you read that? Yes. THIS is the reason why she didn't send Iris to school one day last week. While I will agree that yes, it was cold. It was insanely fucking cold. But there was no snow. And this week is even colder. She has her own car. It's not like she has to stand outside and wait for public transportation to roll on by whenever it feels like it. Our classrooms are heated, though our hallways are ideal for storing butchered meats.

It makes me sad for Iris. I know kindergarteners don't have to take tests and the biggest worry they should have is what color crayons to use for the pictures they color. But when parents have this kind of attitude toward school, it sets the tone for the future. Meaning Iris won't really care about school which is a huge shame because she's a bright girl. Her mom is teaching her that she can shirk her responsibilities for the flimsiest of reasons.

Up until a few weeks ago, we had an adorable Chinese boy named Jacky in our class. His mom added him in the middle of the semester and then, after one of our notorious troublemakers pushed him down in the hall (not on my watch, thankfully) she pulled him out again. I can understand her concern about that situation, but when he was attending our school, the mom would bring Jacky late. EVERY day. Not a few minutes either. We're talking 30 minutes. 40 minutes. 45 minutes. An hour and a half. I had told her kindergarten classes start at 9am and she needs to have him at school by 8:50am. Her English skills are not good so Christina repeated that sentiment in Korean. And in Chinese. Even our director, Lesley, told Jacky's mother to please bring him on time. Her excuse? You'll love this...
"I'm busy."

Seriously?!? What is more important than your child's education?!? If you're so fucking busy doing your damn nails or your hair, why not put him on the school bus for fuck's sake?!? Busy my ass. Lazy is more like it. Jacky's mom and Iris's mom should totally hang out, go shopping and buy overpriced lattes. They can put their heads together and come up with even more ridiculous excuses for bringing their children to school late, or for not bringing them altogether.
Posted by JQ at 6:20 AM