You know that I'm supremely pissed when I can't even pull a clever title for a post out of my ass. And of course, you can probably guess who sent me off into a rage. MIL!

There's been a few things bubbling up lately. Such as having to remind her AGAIN to give Raelynn the breast milk I leave for her. WHY IS THAT SO FUCKING HARD TO REMEMBER?!? I want so badly to tape a note for her onto the refrigerator that would be the Chinese equivalent of this: "Dear insipid, vomitous cow, give my daughter her milk or I will take your goat face and shove it up your hairy baboon ass." I better use Google translator for that because I doubt Jeremy will assist me in compiling that note.

Then there was the incident where she threw out my coffee measuring spoon! It was inside the almost-empty bag of ground coffee I'd had left. She leaves garbage everywhere but oddly decided THIS she would toss into the garbage. Sigh.

Also, MIL and FIL kept bringing these jugs that at one time, had contained peanut oil, which they had rinsed out and were now using to lug us drinking water. I should add that we would have real jugs of drinking water delivered here. Until earlier this week when my husband had a filter installed so now we can just get fresh water from the tap. Which is awesome. Especially since his parents' so-called fresh, clean mountain drinking water had pieces of dried tea in it. Yeah, real clean you guys. Now at least they won't bring these stupid jugs of water anymore.

These things were just mildly irritating. And as with anything MIL (or even FIL) ever does, each thing on its own doesn't send me into a rage. But added together they sure do, especially when added to what I discovered today...
One of my dimbulb in-laws broke the drum pedal on Raelynn's toy drum set! 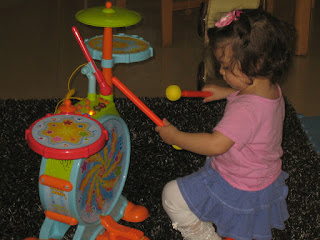 Now when you step on it, it doesn't press down and make that lovely big boom that it should. I want to club them both in the head with the drumsticks. 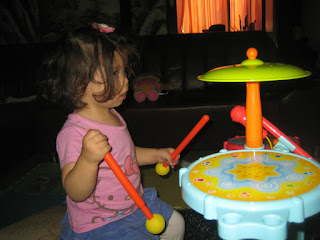 Raelynn loves her drum set and we do too. We got a great deal on it, but it still infuriates me that everything nice or cool that we ever have gets ruined somehow by Jeremy's parents. They don't even say, "Oh hey, sorry I broke that thing." They just break it and say nothing about it, which they have done so many times now, I've lost count. Or they get stains on Raelynn's nice clothes which has forced me to resort to dressing her in things I either don't care about getting ruined or darker colors. She just got a bunch of cute clothes from my parents and her Uncle Phillip and Aunt Kimmy and I don't want to come home after a long day of work to find that the cute clothes I've dressed her up in are now stained with soy sauce and Lord knows what shitacular barf she's cooked up for my poor child.

Here's hoping those troglodytes don't further damage this kick-ass drum set, or anything else. Especially my angel-baby. I'll end with a photo of Raelynn enjoying the drum set the first day we got it: 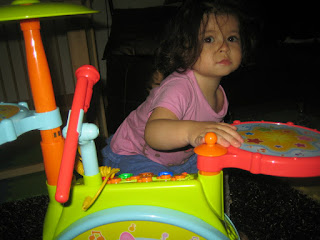 Email ThisBlogThis!Share to TwitterShare to FacebookShare to Pinterest
Labels: Adorable Raelynn, Hooray For Breastfeeding, Major Rant, MIL Problems, Stupid People, This Is Why We Can't Have Nice Things