Whoever did the electric in our apartment (and likely this whole building) is the world's laziest and stupidest person. Seriously. China has such a reputation for shit falling apart and it is easy to see why. This building is only 10 years old but it looks more like it's 30 years old. You've seen my father-in-law's handiwork, so just imagine a country full of people who do a totally half-assed job when they fix things. I think of The Simpsons in that Mary Poppins parody episode. You know, the one where they sing, "If there's a task that must be done, don't turn your tail and run. Don't pout. Don't sob. Just do a half-assed job." (I tried looking for a clip to link up from Youtube but was sadly unsuccessful.)

Anyway, we've been having this problem for a while now. When the light in the kitchen gets burnt out, changing it results in it blowing the circuits. Yes, that's right. Poor Jeremy has gotten shocked trying to fix it. Of course, he refused to pay a professional to come in. At the time, I just thought him crazy and a glutton for punishment (he blew the circuit about 8 times trying to fix it that day). But then I realized that we would just be paying another idiotic person who would do a craptacular job. Why not do a shitty job for free?

Anytime my husband tried to screw the light and fixture back to the ceiling, the damn thing tried to screw him. So, he instead taped it back up. Which actually worked. For the light fixture itself, he used a clear adhesive tape which you couldn't see. I would have preferred not to have a light taped to my kitchen ceiling, but even worse would be a barbecued husband. So tape it was.

Last night, I heard a noise while feeding Raelynn in the middle of the night. I couldn't figure out what it was but knew we were in no impending danger so back to sleep I went. In the morning, I had completely forgotten about the noise until I saw our plastic light fixture on the floor and the wiring and bulb dangling from the ceiling. I groaned at the sight of it. That damn thing again. If someone with half a brain had actually wired this place like a real electrician, then this kind of shit wouldn't be happening. Here, things seem to be held together with tape and spit. Quite literally.

When I returned home from work today, the light had been repaired. No, not by a so-called professional half-wit. Not even by my half-wit father-in-law. No, no, no. My husband saw fit to fix the light before going to work this morning. Only he channeled the half-assed spirit and this is what he came up with: 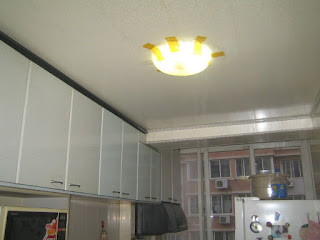 He used package tape! Dear Lord, he used package tape! I am still beside myself that Jeremy himself did this. He usually takes care not to make things look crappy which is why I had initially suspected my father-in-law. This totally looks like something the FIL would have done, especially after that whole thing with the cabinet door that he taped over the satellite cable so Raelynn wouldn't rip it off the wall (that's in this post, which I linked earlier, in case you were too lazy to go look). 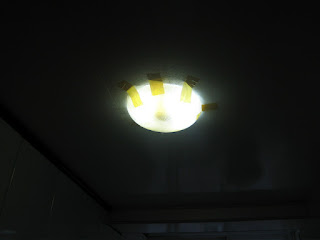 Here's a closer look at the sketchiness that is our kitchen light, now adorned with package tape. I am so envious of my friends with real light fixtures. On the plus side, my husband didn't sustain any injuries (I think my eye incident was enough for one week). Another bonus to having a slapdash light fixture like this is that if it does fall off the ceiling again (as it is known to do every so often), it will not shatter into a zillion pieces that our sweet daughter will attempt to eat. Maybe a compromise is in order. Perhaps a prettier plastic fixture bejeweled with clear tape. Hey, I can dream, can't I?
Posted by JQ at 7:12 AM