My  FIL can sometimes be a very handy guy. Emphasis on the SOMETIMES. He's successfully repaired some things around our home. Like the light in the bathroom. Or the laundry rack (which I had MacGyvered with some package tape, though my friend Tommy Peek would likely say my fault was in not using duct tape as the package tape didn't hold). Or the window screens. Or the dresser drawers. Yes, he's fixed quite a few things and I've certainly appreciated it.

But today just wasn't his day for do-it-yourself handiwork apparently.

Yesterday, Jeremy and I noticed the cable connecting the satellite box to the satellite was sticking out from the wall. The satellite was coming in fine but the only explanation for the cord jutting out from the wall in such a fashion was the baby. Raelynn is now quite mobile. If she's not sleeping or in the playpen, you HAVE TO be right there with her to make sure she doesn't touch something dangerous or make a mess. It's not her fault. She's a baby. To her, EVERYTHING is her toy. EVERYTHING is something to eat. And EVERYTHING belongs to her. Of course! So while we were at work, the stupids must have been too slow in stopping her from yanking it up from the wall. All last night until I put her to bed, she kept going back over to the cable and trying to pull on it. My husband told me he would fix it tomorrow.

And now that it is tomorrow, which means it's today, I should have known that Jeremy meant that he'd have his father do the fixing when he said what he said. Even under that assumption, I am still perplexed by FIL's home improvement. Or rather, home unimprovement. Take a look... 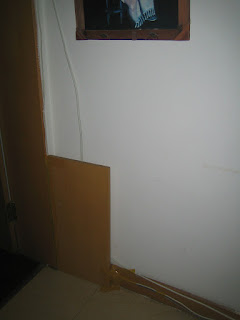 Here you can see the cable, which runs from the TV (not in the frame but to the right) through our bedroom to the connecting satellite outside. The cord ran along the baseboard and up the crevice between the wall and door. I thought that my husband would simply run it back along there again and secure it with pins this time. But instead, my FIL, bless his heart, tried to be helpful and this is what we get. He has taken that piece of wood, which is actually a door to a cabinet in Raelynn's room that I have been pleading with anyone who will listen to put back on the cabinet where it belongs, and he has TAPED it to the wall. No fucking joke. Here's a closer look: 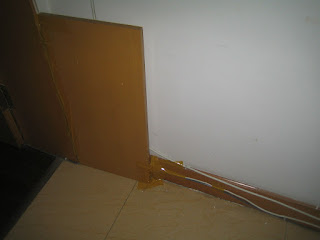 Do you see the fucking tape? DO YOU?!? Tape didn't stop Raelynn from ripping a cable off the wall so do you think tape will stop her from yanking a plank of wood from the wall? She's one strong baby. This won't stop her. She'll get around to destroying it, if it lasts that long. Jeremy promised me he'd have a talk with his father about this. Not only is it ugly but it also isn't very effective. 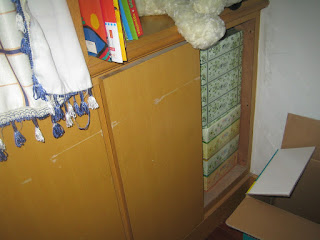 And here is the cabinet in Raelynn's room where that piece of wood is missing from. Yeah. Nice try, FIL. But you have plenty of room for improvement in the field of home improvement!