This weekend, Jeremy sold our car. I didn't expect to feel so sad about it. After all, I was the one who didn't even want him to drive here in the first place. We've been through a lot with that car. It's become like a member of our family. One that I will miss more than my husband's parents.

Jeremy went with a buyback program at a dealership. They offered him a fair amount for it and agreed to pick it up on Monday. That gave us an extra day with the car. So we decided to say goodbye to it.

I've had 3 cars in my life so far. The first one was my 1993 Saturn SC1 which I had for 8 years until a drunk driving loser smashed into it. Lucky to be alive, I then bought a 2001 Nissan Sentra. And my last car was my favorite...a 2006 Pontiac G6 V6. I loooooooooooooved that car. 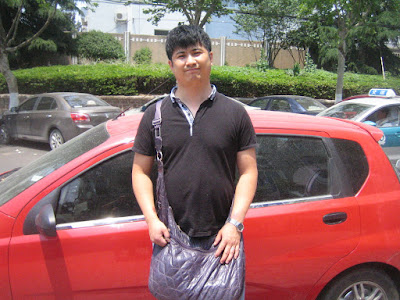 But this 2008 Chevy Aveo was Jeremy's first car. His face says it all - all his hopes for the future and all his sorrow for saying goodbye. It is oddly difficult to bid adieu to cars, isn't it?

We decided to take our special red car (as Raelynn had nicknamed it) to Metro one last time. That way, we could also say goodbye to Metro. For better or worse, it's been the supermarket we've frequented the most during our time here.

We bought wine and cheese, green tea ice cream, cereal, bread, yogurt and a few other essentials that we'd need over the next 20 days. It was strangely uncrowded, which was a plus. But despite it being mid-June, the air conditioning was not on. Add that to the list of things I won't miss about living abroad in Asia. Sigh. 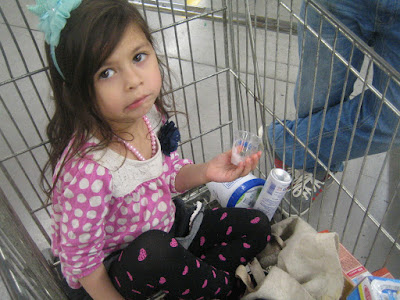 Raelynn got a sample of yogurt but accidentally dropped the small plastic spoon they gave her through the bottom of the cart. Sorry kid...maybe you can try to slurp it out somehow but we're not giving you a spoon that fell on the dirty floor. Yuck! 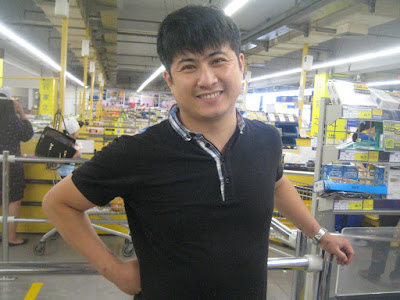 Jeremy poses for a photo to commemorate our last time in Metro because I didn't slap on any make-up and was not about to document that by taking a picture. At least this face is happier than the one he was making by the car. Maybe because he's happy it wasn't crowded and the lines were short. Or maybe he's thinking that he doesn't care it's our last time at Metro because I've told him so much about Publix.

In any event, goodbye Metro. We will miss you, but not as much as we'll miss our special red car. And to our special red car, thanks for making our days in Qingdao a lot more convenient. We hope your next owner comes to love you as much as we have and that if they have any children, they will not get as many crumbs in you as Raelynn did.
Posted by JQ at 6:28 AM