The Day I Was Mistaken For A Chair 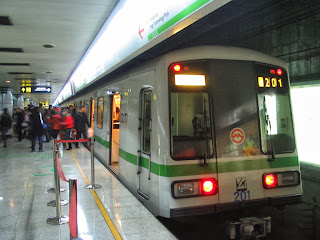 After our grueling one-hour-that-felt-like-ten-hours-flight-with-a-tantrumy-toddler, it was refreshing to easily claim our luggage and start on our way to our hotel. We took an early flight so we had plenty of time before my family arrived in Shanghai. Jeremy suggested we take the subway. He probably wouldn’t have made this suggestion had he realized it was about 12 stops away, but that was fine. We both love subways. They are building one in Qingdao and we can’t wait until it’s finished. Riding the subway in Korea was one of my favorite things. I loved being able to get around so easily. Plus, we thought Raelynn would enjoy the ride too. She is too small to remember the first time we took her on the subway when she was 1 month old.

While Shanghai people are far more polite than those up in Beijing, they aren’t as friendly as Qingdao people can be. In Qingdao, get on any bus with your kids and watch everyone jump up to offer you their seat. In Shanghai, get on a subway with a baby and people will pretend not to notice you as you struggle not to wobble over while simultaneously holding your child. As the train prepared to make a stop, one of the seats opened up and Jeremy told me to take Raelynn and sit while he kept the luggage from rolling away.

I sat down with my kid, who, for whatever reason, decided she did not want to sit. So while in my seat, I have a squirmy kid trying to escape, screaming all the while, and then, I am not joking when I tell you some horrid cow sat on me. Yes, that’s right. She fucking sat on me. I was sitting in a chair on the subway and she sat right on my lap. Being the loud, bitchy American that I am, I of course yell at her. My husband gets involved as I jump from my seat, absolutely astonished that someone would sit on me and then not even notice. She settles into the seat and people have now actually gotten up to let her husband and grandchild sit down. The grandchild is apparently sick and they are taking her to the doctor. Oh good! Bring a sick person onto a train. Why don’t you take a taxi?!? There are tons of taxis in Shanghai. They are quite easy to get. She tells my husband she didn’t see me there. HOW DO YOU NOT SEE ME, YOU OLD BAT?!? She starts apologizing and as Jeremy is relaying what she’s saying, I’m offering my own very snide commentary on the matter. I notice some of the passengers understand English quite well because they are chuckling at my caustic remarks. Another seat opens on the bench next to these people and she’s telling me to please come sit down. I don’t want your sympathy seat, asshat. I don’t care if I never fucking sit again. Cow. And I certainly don’t want to sit next to your grandchild who is ill so that my daughter and I might come down with whatever it is that is ailing that poor child. So yeah, shove it.

I know I’ve lost a bit of weight recently but I had absolutely no idea I was beginning to resemble a chair of all things. Now this situation is a bit amusing to me of course, but I have to ask you all – would you be able to sit on a subway (or even a bus) and not notice there was someone already seated in the seat you were attempting to sit in? And suppose you really truly from the depths of your soul did not notice them, would you continue to sit on them as though they were just a chair, without offering an apology until their spouse demanded one of you? Yeesh. My grandpa was truly right on when he used to say, "it takes all kinds."
Posted by JQ at 2:31 AM