A very belated Happy New Year to you all! How did you spend it? Falling asleep before midnight, like we've been doing the past few years since having children? Maybe one day I will make it past midnight. At least this year, I had an excuse besides the children.

Before the end of the year, I'd gotten a cough. It wasn't much more than that. Just a hacking, annoying cough that I likely picked up from one of my germy students. Or Raelynn. She was coughing too. But then she got a fever right before the kindergarten performance. We took her to the doctor after and consulted him about my cough as well. We each got some medicine and figured that would be the end of it.

A day or two later, Seoul had a fever and a very slight cough. Ugh. Here we go again. Another trip to the doctor. Medicine for her. Which worked...on the fever. The cough kept persisting.

Even through the new year. Onto New Year's Day, which is FIL's birthday. Since marrying my husband, I've always felt the new year started out in a crappy way each year because we'd have to celebrate FIL's birthday instead of relaxing without my in-laws. But now I think I've changed my mind.

There's worse things than a lunch full of food and booze.

I've said it before - in China and Korea, a trip to the hospital doesn't necessarily mean an emergency. It's just where you go for treatments and such. Whatever Raelynn had was much worse than we thought. She had to get an IV treatment for a total of 5 days. The good news was that she didn't have to stay in the hospital - she only had to come once a day for about an hour or two. On the third day of her treatments, I was feeling worse than ever. And Seoul's cough was getting worse. So I told Jeremy I wanted us to be checked out as well. Seoul, thankfully, just had a viral cold, the doctor told us. She prescribed some medicine and said the cough was not in her chest and she would be fine. It was a huge reassurance since I'd made myself insane looking online at the symptoms of RSV and Whooping Cough.

After we had her checked out, it was my turn. The doctor sent me down to radiology for a chest x-ray and then to have my blood tested. My father is a radiologist so this is a familiar area for me. How I wished he was there then! A ripple of terror ran through me as I stood there, positioned for my x-ray. What if it was cancer?

A man that the doctor was speaking to before us had a serious lung disease. I know this because Jeremy told me what they were saying. Here, it is very common for others to be in the room while you're being diagnosed or examined. Jeremy had shooed Seoul and me away from him but I figured the old guy had probably smoked all his life. And then it hit me. God. I was sooooooooooooooooo stupid for soooooooooooooooooooo many years. I smoked. God. Please don't let it be cancer.

A couple years ago, my brother sent me an email that he had written our dad, along with his response. My brother had asked him what had happened when Mom died. Phillip was 17 then and I was just 9, but his memory is blurry too. He couldn't remember how long she'd been sick with lung cancer and how we'd found out. My father said that one morning, Mom woke him up because she couldn't breathe. He took her to the hospital. They did an x-ray and when my father saw it, he fainted it. She had an extremely rare form of lung cancer. There was nothing Daddy or anyone could do. She was going to die. It was August 1985 when they found out about the cancer. She died on October 20, 1985. Yes, just months later. She was only 42. I'm 38. I'm getting close to that number.

I don't want to die young! I want to see my precious children grow up and have families of their own. I want to grow old with my husband.

And then, the x-ray was over. And the x-ray tech told me not to worry - it was not cancer. No sign of cancer! Thank God!

But guess what it was - bronchitis! Man, I have not had that since I was a heavy smoker years ago. The doctor prescribed some medicine that was safe to take while breastfeeding and told me to get bed rest.

That left me with a problem - how to rest AND take care of the children?
MIL.

I have to admit, she's been so helpful. She's the only one of us who can give the baby her medicine without her spitting it back up. Plus, I've been too weak to cook, much less make sure Raelynn eats properly. Either she's making good food or I've just been that sick that it doesn't taste so bad. Or I'm delirious.

Yes, it's a wacky new year, alright. I could look at it in 2 ways though - I could sit here and say this sucks and this is the shittiest new year ever, or I could think positively, learn from this and have a great year despite this bumpy start. I chose the latter.

I've learned that it's OK to ask for help when you need it. I've learned that I should be nicer to MIL because she does care about all of us and just wants to be helpful and useful. Yes, she's annoying sometimes and she will likely try to annoy me once I'm completely well and don't need her here from the time Jeremy goes off to work and then returns home again. I've learned to be grateful for what I've got and that I should think positively for 2015.

So that's what I'm going to do. Oh hey now. Don't worry. I'm still the same bitchy me. I'll find plenty to snark about, even MIL, as the year goes on. I'm just remembering a little humility, and that never hurt a person now did it?

Much excitement coming in the next few weeks but more rest is needed now. And with that, I'll leave you with some bad hospital Engrish. Wishing you all a prosperous and healthy 2015! 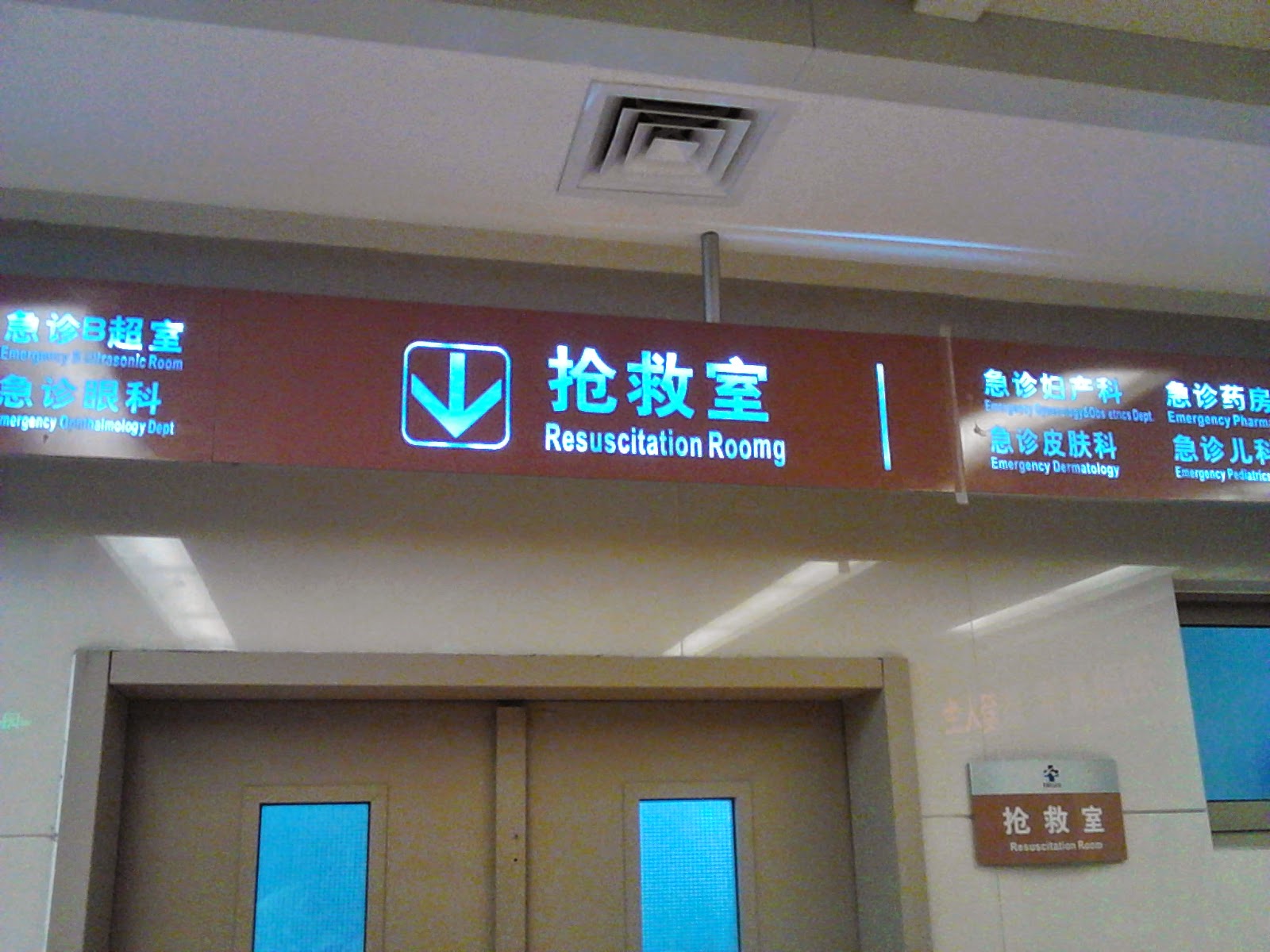 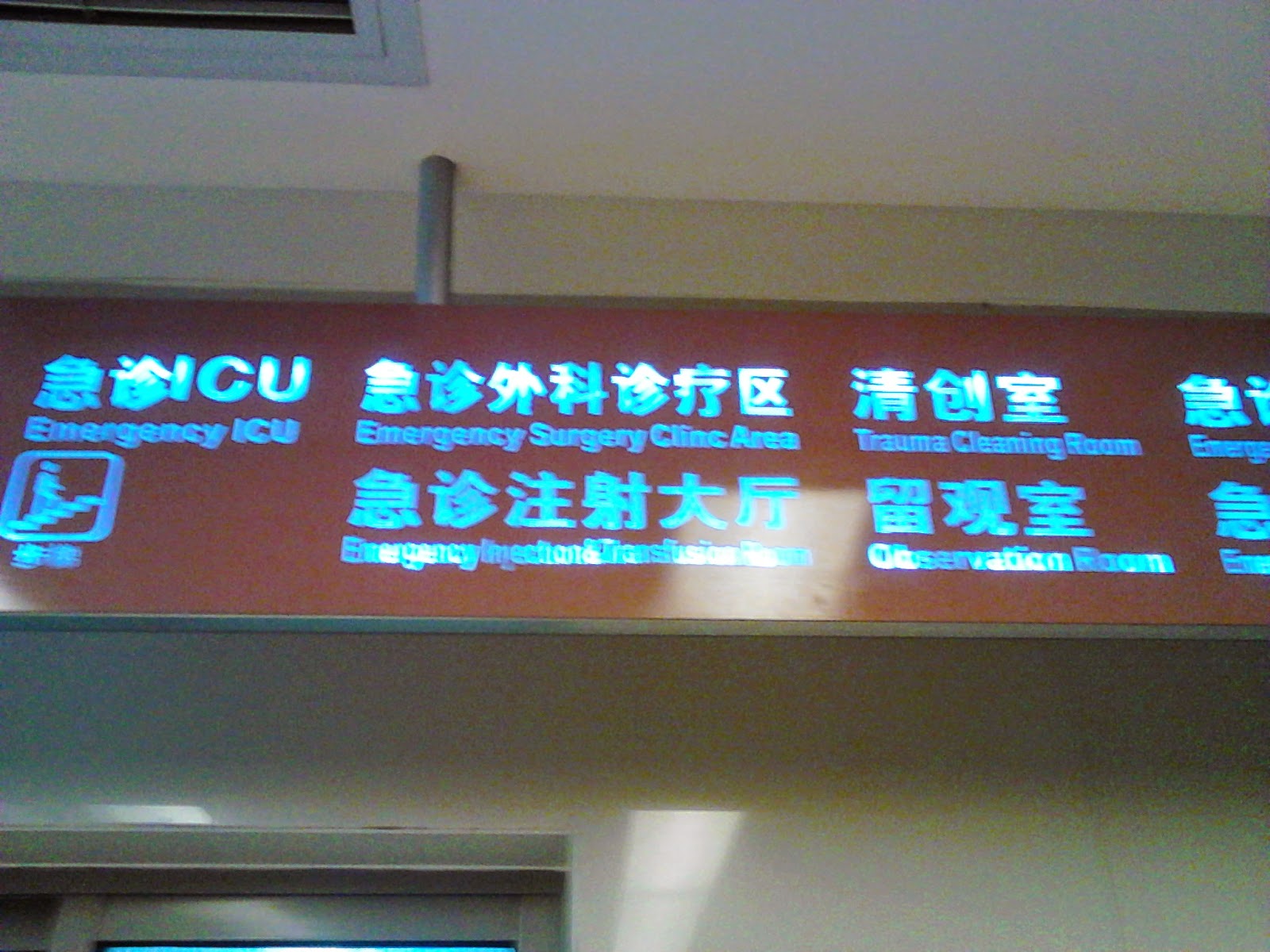 This one is a bit tougher to see. Let's see if you can spot the error.
Did you find it yet?
How about now?
Give up?
It says "Emergency Surgery Clinc Area." It's so subtle, I know but the "Clinc" made me giggle a bit.
Posted by JQ at 4:39 AM