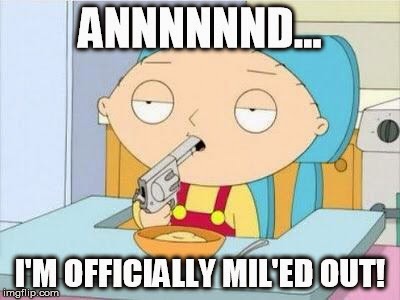 That didn't take long, did it? Of course not. Because this house is too small. There's no space to retreat to in order to escape from MIL. This vacation hasn't really seemed like one so far and that's in large part because Raelynn, Seoul and I got sick. We needed MIL's help. It was great of her to help, really. She truly relieved a large burden from me while I was so sick. She helped give the baby medicine, something I was unable to do without causing Seoul to spew it all over creation. She made food for us and made sure Raelynn ate her food. She even cleaned the house.

Yes. She did that. I watched in amazement. It was like seeing a unicorn, I imagine.

Sure, she left some crap out on the kitchen counters, but she cleaned those counters. And I just tried to let it go when she left out a half-chomped on luo bo. Because she cleaned everything else.

But now, it is Friday. The baby is better. She took one last bit of medicine this morning. Raelynn is very well now too. And so am I. It was nice of her to watch the baby while I took a small nap - between changing schedules and teething, Seoul was very difficult to put to bed last night. And about 4 hours ago, at 11am, I was officially over it.

I think what set me off was that yesterday, she took Raelynn for yogurt at the place near our home. I didn't mind that she did that. But she did it again today. And now I see she's trying to establish a pattern, just like she did while I was on maternity leave. And it makes me a bit angry. Instead of shouting at her though, I told her she could not take Raelynn out like that anymore. Once a week is fine. Even 2 times a week wouldn't bother me. But I will not allow her to go every day. No way.

"Hao le, hao le," MIL says, smiling away. It takes all my strength to speak to her politely. Hey, it's not her fault she's annoying. She's just trying to help. All week, she's been here when you needed her and you're going to rip off her head and shove it down her throat? Not cool, Jenn, not cool.

I busy myself with a task that needs my assistance at once - Seoul's clothing cabinet. It is a disaster. We can't figure out what she can wear and what she can't because everything has snowballed into a pile of things. Some of those things are newborn-size while others are still entirely too large. I enlist Raelynn's help and Seoul sits in her chair, watching us as I go through everything. I let Raelynn make the pile of clothes that Seoul has outgrown and I reorganize the rest of the stuff so we can easily find clothes to dress her in.

By the time I finish, Seoul is making a fuss because she's hungry. I leave the pile of too-small things on the floor to pick up once I'm done. As I feed Seoul, I hear MIL question Raelynn about the clothes. I hear her rummage for a bag. Oh no you don't you! What will you do with clothes that are too small for our baby? Hmm? You do not need them. I will be selling the nice items and donating the others. I should mention that 2 weeks ago, Jeremy tells me she wants our other baby tub. We have 2. One was a gift and the other we bought. One of them is smaller than the other, not by much but enough so that we have always used the larger one. The smaller one has been tucked out of the way, despite my pleas that we should sell the thing. And now THIS is why. Because this woman wants a baby bath tub for no fucking logical reason that I see. Jeremy explained to me that his parents want to take it to their house in the mountains and use it "to store food." God.

So all this pops into my head at once and I'm still trying to stay cool. No, I tell her about the clothes. We will sell these. Leave them alone please.

Then my phone rings and I'm ever-so-delighted that it's my friend Jon from work and I can vent to him about MIL. As I'm talking to him, MIL calls to me that lunch is ready. Oh joy. I gesture to her that I am on the phone. And she keeps telling me to come to lunch. Um, what? I am on the phone. Are you serious? Piss off, old lady. I mean, be there soon! God, this is hard, being nice to her. I just want to talk on the phone. Urgh.

Today's lunch was huntun (wontons for those of you back home) and I'm officially over it. I cannot eat another wonton. I cannot eat any more Chinese food. I can't. Make it stop.

So I tell her, as nicely as I possibly can - which you know is a huge challenge for me - that I want American food and that I will cook dinner. Ok, she says. I'll watch the baby while you cook, she tells me. Um, no. Thank you so much, I tell her, but that's ok. You can go home.

I smile as I say it and am nice, so this is different than my usual get-the-fuck-out attitude toward her. And it's killing me. After a week, I desperately need a vacation from her. Gah!