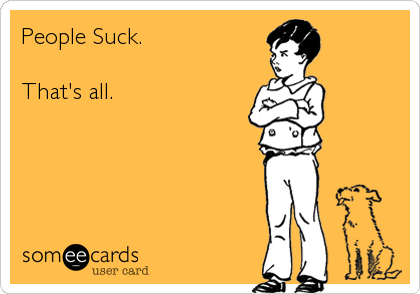 Sometimes, people just suck. I've been meaning to write about some of the suckier ones I've unfortunately encountered but other stuff's been popping up. After today though, I'm ready to snap, so I need to vent. And believe it or not, MIL and FIL are not on this particular list. They suck, for sure, but this is strictly about encounters with strangers who totally blow. So, join me for a tour of suckage, won't you?

The Gaggle of Suckotrons at the Metro
Around the end of October, we had gone grocery shopping at the Metro. This was while Raelynn was adjusting to being back at school and Jeremy and I were working tirelessly to correct the negative behaviors his mutant parents had encouraged while I was out on maternity leave. We were on line waiting to pay when Jeremy plucked Raelynn from the cart. She wanted to stay in the cart but she was crushing our bread and some other items, and she wasn't happy about being suddenly removed and made to stand. And into a tantrum she went. Jeremy handled it expertly, giving her a stern warning to correct her behavior (she was hitting him and shouting) or else he'd put back the bag of pretzels she'd wanted. The bad behavior continued so I fully supported my husband when he took the pretzels out of our cart and put them back. Raelynn wailed and wailed and still continued this epic tantrum of embarrassing proportions. So, with Seoul strapped to me in the carrier, I snatched Raelynn under one of my arms and dragged her out of the store.

There's a glass-enclosed exit area where, in the colder months, various vendors have other items to sell, like overpriced Belgian chocolates or plants. I carried her there and set her down to wait for Jeremy. The people at the chocolate booth started to come over and try to offer samples. I did not want people giving my kid candy during her tantrum, like people here are known to do. As I'm yelling at Raelynn to stop this insanity now and mentally lamenting that I didn't get the car keys from Jeremy, I look up and see some college-aged girl from some volunteer group booth taking my picture with a Nikon. No fucking joke. And that's when I absolutely lost it. I began screaming at her in a mixture of English and Chinese and as she snapped away, I flipped her off. Then and only then did she turn away in embarrassment. I struggled with Raelynn some more and now about 20 people had congregated to stare. Bunch of suck-ass fucks. The security guard then approached me and I thought he was going to offer Raelynn some candy as she writhed on the floor like a total jerk while I desperately tried to pick her up without dropping Seoul from the carrier. But he was the only one of all those people - now more had gathered - to even bother to help me out. He picked her up off the floor. And he said nothing judgmental at all. Thank you, Kind Metro Security Guard.

Shortly after this, which incidentally, felt like 1,000 years but was more like 10 minutes, Jeremy emerged with our cart of groceries and he, who usually implores me to be patient with the people of China, totally told all of them off. My hero husband. I love you. Thank you for chasing the suckos away.

The Sucky Nosy Lady on Our Street
Maybe a week after the Metro incident, this next mess occurred. Raelynn was also prone to throwing tantrums when I woke her up on the school bus once we arrived at our stop. I tried everything I could think of - punishing her, keeping her awake, offering a reward for waking up without pitching a fit - but every time, it was agony. I felt like the bus driver hated us. I wouldn't have blamed him.

So I drag her kicking and screaming off the bus and ignore the usual stares. Then she tries to dart away into the street. So I grab her, carry her to a safe patch of sidewalk and give her a spanking for doing such a dangerous thing. She cries and says she hates me. I then tell her she's in big trouble and I'm taking a toy from her. Now she changes her tune. She's sorry and crying and just a total mess while I tell her I'm not speaking to her for now. As we're talking and walking, and she's crying away, some nosy lady skitters up to us, like that small yippy dog that always followed Spike the Dog in the old Looney Tunes cartoons. And like all idiot people here, she tries to interfere. In Chinese, she asks Raelynn why she's crying. We ignore her, as we're talking to each other, and keep walking. She persists and keeps bothering us. So finally, I stop and turn to her and in Chinese I tell her to mind her own business, and that my child is crying because she was being bad and now she's in trouble. The woman stares at me. Again, I repeat myself. And she still just stares as if I'm speaking some alien language to her. Finally, I shriek at her to fuck off and get out of my sight and she hightails it out of there. You, Sucky Nosy Lady on Our Street, suck tremendously.

The Sucky I-Can't-Believe-It's-A-Girl Lady in the Restaurant
On Sunday after church, we went to our favorite hole-in-the-wall restaurant. We requested a private room and as we were led there, a woman around MIL's age (perhaps slightly younger) who was seated at a table we passed became overjoyed at the sight of Raelynn and the baby. So she popped into our room and asked if she could take a look at the children. Sure, we say. She makes a huge deal about how gorgeous Raelynn is. And then she turns to the baby and she says it must be a boy. Is it a boy or a girl? It's a boy, right? Um, no. She is also a girl, I say, giving her the eye. And then the woman complains to my husband that I frowned at her about this. He tells her that she's rude for judging us for having 2 daughters, that we are very happy to have 2 daughters and that we didn't want a boy. She leaves and loudly complains about us to her table in the main part of the restaurant. Asshole. You suck for thinking a boy child is better than a girl child.

The Sucky Mom Who Basically Called Me Fat
As you know, I had my 2nd child in mid-July. I work. And when I come home from work, I have maybe an hour or 2 before my baby gets tired and cranky and wants to sleep. That time before sleep is filled with nursing her, bathing her, singing her songs, playing with her, talking to her and other Seoul-and-Me things. How I would love time to get in a real workout but this time will pass all too quickly and I don't want to miss a moment of it. So I'm not yet a stick again, like I'd hoped. I lost about 22 lbs. from breastfeeding and have remained at the same weight no matter how much or how little I have eaten since. Every chance I get, I am moving around during my classes and trying to take advantage of the general activeness of kindergarten children.

This week, we have optional PTA meetings. Of course, for my class, the only parents who want to meet with me are the parents of my very best student. I have nothing new to tell them about their wonderful daughter so I have no idea why they want to have a meeting. It's always this way for the 2nd semester. For 1st semester, meetings are mandatory. But when they are optional, it seems only the good students' parents want to show up. So for my fellow kindergarten coworker, Jon, the parents of his student with the best English skills came in for a meeting today.

The meeting was toward the end of the day so I guess his parents just stuck around until the children were dismissed. Before bringing my students out to their school buses, I popped into our office to grab my coat and change into my outdoor shoes (we have to wear slippers inside the kindergarten) and ran into the mother of this boy. I greet her and as I'm slipping into my coat she asks me, "Oh are you expecting a baby?" I freeze, with one arm mid-sleeve and stare at her. Christina, my Korean teacher, looks appalled by this woman and even though I've said nothing yet, knows me well enough to know how pissed off I am. My pleasant smile dissolves instantly and I cast her an icy glare. "No, I just had one four and a half months ago, but thank you so much for calling me fat," I tell her. She gives a half-assed apology and I give her the mean-girl laugh. If you know me, you know EXACTLY which one. She is just lucky she's a parent of one of our students because if not, I'd have tore her a new one.

The funny thing is, I was feeling pretty good about myself until that moment. And even funnier is that woman was in the room when I was pumping my breast milk during my break time. Yes, I'm pregnant AND pumping milk. Moron. The only wise thing she did was stay out of our office and away from me after insulting me. Talk about the height of rudeness. No, my stomach is not flat yet. I have 2 beautiful daughters to show for it though. Some day, I will get my body completely back in shape but for now, I have to take baby steps to get there. I know that I will never regret spending time with my girls. Sure, it's disappointing to not have bounced back but I'm not 20. I only LOOK 20. Ok, 28. But still. It's a work in progress and I really resent some sucky bitch asking me if I'm pregnant when I'm not even close to looking like a pregnant person. Even a pregnant person in the early stages of pregnancy. Yes you, Thinks-She's-So-Perfect-Mom, suck most of all. 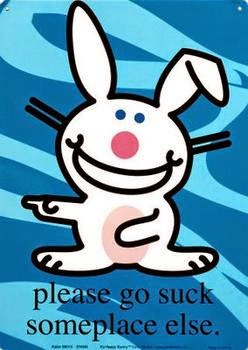 By the way, some good did come out of the first 2 encounters with sucktastic people...Raelynn has learned her lesson after being punished for her bad behavior. That, coupled with limited time with her grandpa, has left us with a wonderfully well-behaved little girl who no longer throws tantrums in an attempt to get her way. Thank goodness, on so many levels, especially so that I no longer have to endure gaping stares from sucky strangers on the street.
Posted by JQ at 4:49 AM