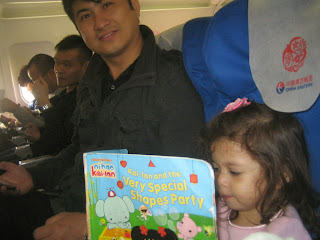 Raelynn at age 2 1/2 on the flight to Shanghai. This photo was taken after she chilled out from throwing an epic tantrum and agreed to read with me. Hooray!

For a year, we’d been planning a trip down to Shanghai to visit with my family. We’d planned it last year when they’d come to visit us here in Qingdao for our vow renewal ceremony. It made saying goodbye a little easier, knowing that we had a date set to see each other again. This time though, my parents wanted us to meet them in Shanghai. I love Shanghai. It’s an amazing city, though I still love Seoul like no other place on earth. Still, there are worse places to be. Far worse. And one of the best is indeed Shanghai.

The first time we went, it was before Raelynn had been born. I was about 6 months pregnant and Jeremy and I went there for a mini-honeymoon. We returned once more after Raelynn was born to get her US citizenship at the consulate there. Despite being an infant, she was very good on the plane. We also took a trip up to Beijing when Raelynn was a bit bigger but she still wasn’t walking yet. And again, she was good on the plane rides.

Shanghai and Beijing are both about an hour flight from Qingdao. Still, for this trip, I prepared and armed myself heavily with things to keep Raelynn occupied. When she was smaller, she slept and breastfed. Now she’s 2 ½. It takes more to entertain her. I also spent weeks preparing her for the trip. I told her about airplanes, staying in a hotel, how we were going to see Papa, Mimi and Uncle Phillip and all kinds of things. We packed her a bag of her own filled with toys, cards and books. We also packed our iPad. And don’t get me started on the snacks – my bag was loaded with goodies of all kinds. Yet, despite all this artillery in my arsenal, we still failed miserably.

For one, Raelynn completely flipped out when I buckled her seatbelt. Put her in the seat and she was fine. Fasten her seatbelt? You’d think I’d just ripped her arm off and clubbed her in the head with it. Fortunately, people in China are far kinder about screaming children than my fellow Americans. We apologized profusely to those around us and were only met with offers of assistance and smiles. Somehow, I finally talked Raelynn into reading a book with me (pictured above). When she calmed down further, we gave her a snack. Jeremy and I smiled at each other. We’d won the battle!

Or so she led us to believe.

Soon after, she pitched a fit about sitting in her own seat. She wanted to sit on me. The flight crew thankfully had no problems with this so I distracted her by showing her the things we could see out the window. By the time we’d landed, we both felt like that one hour was 10 hours.

The return flight to Qingdao was not much better. We had even more things to busy her with but problems arose when she wouldn’t sit in her seat. I held her and off into sleepyland she went. I could actually read! So part of this hour flight was actually lovely. And peaceful. Until she woke up. She wanted water. Easy enough. One of the flight attendants brought us some. Only he poured it right into her Hello Kitty cup. But nooooooooooooooooooooooo! She wanted it from the plastic cup which was now long gone as he retreated to buckle up for landing. She screamed, kicked, cried and totally freaked over a cup. Oh man. It was deeply embarrassing but we teamed up and tried our best to calm her down and distract her. And again, we were met with much sympathy from the surrounding passengers. A Chinese businessman in front of us, in perfect English, told us he has 2 children and that flying with them is very stressful at times. Another foreigner a few rows up told us it happens to him all the time when he travels abroad with his wife and 2 kids. Their encouragement helped us feel better about the deafening shrieks she unleashed upon us all.

At least we don’t have to fly every day. But we’re already worried about how we’ll endure any of the flights we’ll take in our near future. We’d like to go to the states soon and we wonder if we can’t keep her calm for one actual hour how we’ll actually make it through 16 hours of tantrums. We can only hope the other passengers we encounter then will be as gracious as the ones we met on this trip. And for those of you with flights coming up, when you see a family with a small child, please have a heart. No parent wants for their kid to throw tantrums anywhere, especially not on an airplane. We all have places to go and we’re sorry we can’t just get off the plane and leave you in peace. I hope you’ll all bear that in mind if we’re on your next flight.
Posted by JQ at 1:41 AM