And The Award For Best Engrish Typo Goes To...

(insert round of applause here)

Coming up this week, we'll be having our Open Class for English. Which is really nothing more than a giant circus of bullshit that the school wants us to put on for the parents' amusement. They don't really want to see how I teach their children to learn real things. Oh no. They want a dog and pony show. And they'll get it. I've been busy working on crowd-pleasing crap, meanwhile Christina has been making sure our classroom looks nice.

I mentioned to her that some of the children's name tags had fallen off the cubbies and we should fix them. She agreed and set off to remedy that. Some of those tags, however, had gotten lost, so she printed them and laminated them again.

On Friday afternoon, one of those tags caught my attention instantly. Here it is: 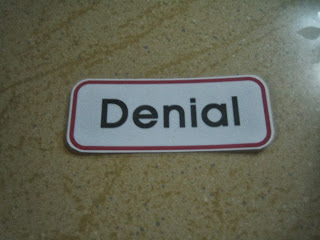 Now, I don't have a student by the name of "Denial," however, I do have one named "Daniel." This typo is absolute gold too, if you know Daniel as I do. This is a kid who always has milk with his snack and who always tosses it into the garbage without first emptying it, creating a huge milk mess in the trash can. And he always DENIES it. Yes. This might be a better name for our dear Daniel.

But just in case his folks figure out what "denial" actually means, perhaps we'd better keep on calling him Daniel.
Posted by JQ at 1:02 AM