It's a boy! What, you didn't know I had another baby? Well, I didn't actually. Jeremy and I have been talking about having another child, but that talk became reality on Saturday when my normally sweet and wonderful husband came home from his soccer game in the afternoon.

Here's a fun fact about Jeremy: he played soccer in college. He was good too. He could have gone pro but he wanted to further his education. That's when he left China and moved to Korea to get his masters degree. He doesn't regret giving up a potential soccer career but he certainly missed playing it for fun. Several months ago, he joined a soccer group and even found some of his old soccer chums. Honestly, it made me happy to see him happy. Until he came home this past Saturday.

"I'm hurt!" he croaked as he walked into our home. Raelynn and I stop our little tea party and go see what's the matter. He tells me he hurt his ankle very badly. He can barely walk. "I'll be alright," he tells me. Now, I know my husband and I know he can sometimes try to be a bit macho about things. I want to look at it and ask him some questions about how his foot feels so I can better help him. Of course, I'm no doctor, but my father is a radiologist, conveniently enough, and despite not following in his footsteps, I have a bit of a knack for handling these kinds of injuries.

Jeremy sits down on our couch and I take a look at his ankle. It's huge. His foot looks a bit like a ham, but thankfully, is not discolored. Judging from the looks of it and how he could still walk around, albeit in horrible pain, I felt that it wasn't broken. He started getting snippy with me when I asked him questions about his foot felt too, but I brushed his grouchiness off. I told him he needed to sit down and elevate that foot with ice on it. And so I began the process of rushing about the house, fetching him ice and a stool to leverage his foot up with and so on and so forth. And it was during this time that I found myself with not 1 temperamental toddler, but 2.

Now, before you tell me to give the poor guy a break, I will say this: I've broken my foot before. And I've sprained my ankles as well. I know what each of them feel like. And while breaking a bone is the worst suckage of all, spraining your ankle and having it swell up is quite painful in and of itself. It's frustrating too. You can't get around very easily and now simple tasks, like getting up and going to the bathroom, are now complex. I get it. I also get how disappointing it is to have to stay off your foot for a while, especially when you've got a lot of things to do. So understanding those things, I tried to smile while my husband acted like a total brat. Tried.

He kept getting up and hobbling around, looking for things he didn't need to use at that moment - a Korean book, some paperwork, etc. And then he'd consequently bitch about how much it hurt. Stay the fuck in bed and put your foot up and the pain will start to subside! Yeesh! He also got all crabby about using an ice pack. "It's cold!" he whined. Um, IT'S ICE. It's supposed to be cold. Der. Then, came the bitchy comments regarding where I should shift the ice on his foot. "Up more. NO! Down! OUCH! Like this! No! Like that!" I smiled as I imagined cramming that ice into his peehole.

Then, he'd call for me and order me around, like I was some pawn on a chess board. Now, I realize that I'm his wife and he's injured, and I need to help him. But he suddenly seemed to forget how to use "please" and "thank you." At one point, he got so surly with me that he chucked the ice pack across the room. It landed with a thud and skidded to a halt at my feet.

I had no time for that shit. I needed to make dinner for Raelynn. Dealing with her was slightly easier at least. By chance, I had to go back into the bedroom for something and now my husband was full of kindness and apologies. I scowled at him for a bit but eventually forgave him. And just like Raelynn, he was a good baby for a little while.

Once Raelynn was asleep, he began with his bitching again. I did everything I could to try to make him comfortable but he was just determined to defy me. Then, he began to panic. What if it IS broken? And now, I begin to worry too, because he's screaming in pain. The sensible part of me knows it can't be broken. It looked like this, by the way: 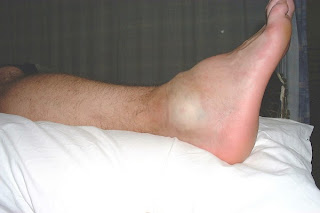 This is not Jeremy's foot, but it could totally double for it in a movie. Seriously.

Anyway, while his foot remained quite swollen, there was no bruising still, which made me stand firm on my earlier assessment of it not being broken. Still, I couldn't remember howling in this much pain the last time I'd injured myself in this fashion. He couldn't sleep and now he was making sure I was miserable too. He started bitching at me about everything. I briefly contemplated kicking him in the other ankle. Instead, I told him that if he was in that much pain, he should go see a doctor in the morning.

When Raelynn woke up in the middle of the night, he moved into her room and set up camp on the floor where he could more easily elevate his leg. I offered him some assistance only to be sworn at in Chinese repeatedly so I left him there on the floor to have his tantrum by himself. Now I couldn't sleep and spent most of the rest of the night watching my precious daughter as she dreamed away.

In the morning, my 2nd horribly behaved toddler had vanished. In his place was my husband, almost good as new. His ankle was still swollen but he was in much less pain. Off he went to the doctor and came back even more chipper still. I'd been right - it was not broken. The doctor gave him some things to help with the swelling and pain, and it's looking much better.

Jeremy was very sorry for his behavior. I've been a bitch to him at times too. It's called marriage. And at the end of the day, we've got a pretty solid one.

Even after all this, I still want another child. Though not a boy. No way.