During the last weekend, my husband and I had to run some errands. What's a weekend without errands, right? The pressure is on as Raelynn's birthday party is rapidly approaching so off we went to start getting our supplies. I made a list a mile long of things we needed, but since the party is 2 weeks off and a lot of the stuff I need must be fresh, those things would have to wait. So we headed off to Carrefour downtown on Hong Kong Road for paper plates and such.

As we were leaving, I started to pull out the stroller. "No, no. We don't need the stroller," Jeremy tells me.
"Yes we do," I say, perplexed. "It will be impossible to shop AND keep Raelynn from running off or grabbing things."
"No, she'll be fine. I'll watch her," he says.

Once inside the store, Raelynn was like a little mischief-prone gnome. Normally, she's strapped in her stroller and just takes everything in. But not on this day. With her new-found freedom, she touched and grabbed anything shiny, colorful or fluffy. And of course, she lunged for potentially-dangerous items. Yes, Honey, fucking brilliant idea to go to Carrefour without a stroller. Now I was stuck reading things off the list, looking for them AND trying to prevent Raelynn from causing any major damage. Was my husband watching her? You bet. He was watching her pull shit off the shelves. Though he did intercede when she'd grabbed a small glass ashtray. Oddly, it was in the same aisle as paper plates, which, just as oddly, had drinking straws and plastic Chinese-style soup spoons but no plastic forks. Go figure.

The aisle of toys was amusing at least. Raelynn pulled all these rubber donkeys off the shelves... 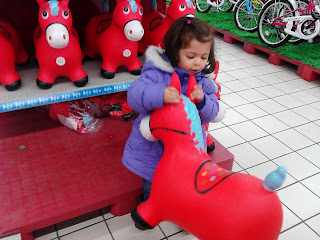 She kept saying "donkey" too which made it all the more adorable. 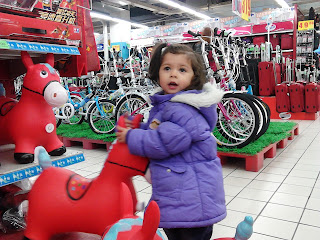 I love the face here. She totally doesn't get why we're telling her "no." She's all "but I want to play with these donkeys Mom and Dad! Sheesh! You guys are SUCH buzzkills!" The employee assigned to the toy aisle looked a little worried, like we were going to let her make a mess and not pick it up but we're not assholes of course. It took us a little bit to put the donkeys back because each time we put one back on the shelf, she snatched another one. Oh toddlers!

In any event, my husband has hung his tail in shame, as he should. And it has now been decreed in our home that the stroller comes with for all shopping trips until Raelynn can refrain from causing chaos.
Posted by JQ at 6:56 AM