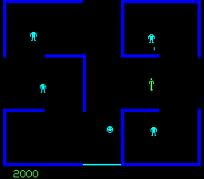 
Last night, we had to endure dinner at my in-laws' house of dirt and vomitous smells. I didn't complain too much because my husband had kept them from bothering us for a full week and a half. This evening, I was determined to make us a delicious dinner to make up for last night's meal. Which actually wasn't too terrible. Just fried. Everything was fried. She made chicken wings, which were great. There was some fried lotus root thing that was also good but again with the frying. There were cashews she'd toasted in, surprise, surprise, peanut oil. And fried dumplings! See? Fried everything! They also served me this wine that I would like to call the Chinese version of sangria. It's black with slices of ginger in it and some weird pruney berry thing that, on its own, actually tastes great. But this wine itself was not something I'd drink if I hadn't been forced into it. It had a burnt vinegar taste. Served hot, it was really hard to get down and FIL kept pouring me more. I had to use the fried food offerings to get the taste out of my mouth. Once it cooled, it seemed to taste better. Either that, or it had burned off enough of my taste buds where I didn't notice so much anymore.

So tonight, I made potato and leek soup from scratch along with little ham and cheese sandwiches with a homemade honey mustard dressing. Husband and daughter were gobbling it all up with glee. As we were finishing our savory meal, our land line rang. I grimaced. Only 2 people call that phone. MIL and FIL. Urghhhh.

It's 7pm and they want to come over to bring us that fucking flavorless lump of shit that Chinese people think is bread called mantou. Like we MUST have that right away. On foot, it takes 10 minutes to walk from their house to ours. They finally arrived at 7:30pm which led me to believe they used the mantou as a bogus excuse to be able to intrude on us. I'll give them props for calling first but holy hell! Get a fucking life please! They had mantou which they likely picked up on the way, a couple heads of cabbage and some greasy, smelly fried fish. But the worst part of all was that they smelled. I mean REALLY smelled. Why don't they shower?!? I'm not trying to be a total twat but they both smelled like they hadn't bathed in well over a week.

When MIL took off her coat, I seethed. Jeremy told me they would just be stopping by for a minute. But of course, they stuck around for 30 of them. I'm annoyed because this is the 3rd time this week I've had to see MIL. Remember, she was lurking around our neighborhood on Tuesday. Then, yesterday (Wednesday), we had that dinner at their house. And now this incident today, Thursday. Enough alfuckingready!

As they were leaving, I heard them talking about "mingtian" which is the Chinese word for "tomorrow." I immediately tensed up. I don't want to see them ever but I especially don't want to see them tomorrow. And thankfully, we have dinner plans with our friend Rose tomorrow so we aren't available to be bored by the gruesome twosome. Jeremy assured me we wouldn't have to see them tomorrow. However, he made us dinner plans with them for Sunday. Oh come on! I've had enough of them. Why can't we go back to seeing them just once every week and a half?

I was never into Star Trek, but I think this photo sums it all up quite nicely... 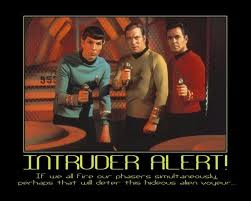 "If we all fire our phasers simultaneously, perhaps that will deter this hideous alien voyeur."
Fire away, boys!
Posted by JQ at 9:30 PM