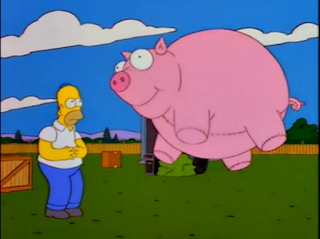 From one of my all-time favorite episodes of The Simpsons, "Homerpalooza." "You're damned right I'm going to be pissed off! I bought that pig at Pink Floyd's yard sale!" - Peter Frampton.


OMG you guys! You'll never believe it. I almost didn't either. I thought this would never happen. But today, pigs were a-flying!

First, I'll start by saying my husband backed me up when it came to his parents being too intrusive. Whatever he said worked because I did not have to see those 2 morons for almost a full 2 weeks. It. Was. Bliss. Oh, the simple things in life I tell ya!

Second, and speaking of simple things, and simple things belonging to those with simple minds, my in-laws finally stopped being such cheapskates and actually had a REAL toilet AND a REAL sink installed in the bathroom. NOFUCKINGWAY!

In case you never read my post from about this time last year, or you need to refresh your memory because you're burnt, go here to check that out. As I've stated before, my in-laws pick THE stupidest things to be cheap about and then they will spend way too much money on something they shouldn't have like a stroller that weighs more than a pickup truck. Or ugly clothes and shoes for the baby. Or ugly jewelry for the baby. Oh man, I could go on and on ALLLLLLLLLLLLLL night telling you about the shit they buy that is a waste of money. But ask them to spend money on something important like a fully-functioning bathroom and it's like the most insane suggestion ever to them.

Until now. I don't know what changed their minds. Maybe they wanted to make sure that once Raelynn is potty-trained, she can use the bathroom easily. Maybe they were sick of me scowling at them and complaining whenever I had to use their disgusting bathroom. Maybe my husband finally got it through their thick skulls that it adds more value to their home. Whatever the reason, it no longer resembles an outhouse in some remote village where people use goats as currency. Come and see!

First, let's take a look at how the bathroom sink used to look: 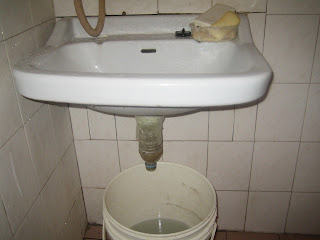 Remember that? You gotta love the upside down plastic bottle to serve as some sort of makeshift piping that allows the water to drop down into that bucket beneath it.

And now, presenting the new and improved sink! Ta da! You'll notice it no longer has a large bucket underneath it to catch the water after it goes down the drain. That's right. It's a legit sink! Who knew! Of course, please note the container of bar soap to the right of the faucet. It is also pictured above on the cracktastic sink they had before. I do not know what the hell kind of soap that is but let me just tell you it fucking smells like burning tires. It is so vile. It is the only soap I have ever used that actually makes me feel dirtier after using it. 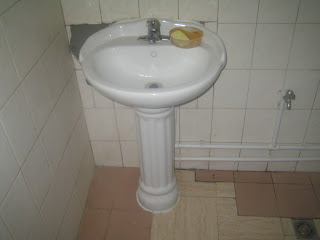 Next up, the toilet. Let's take a look at the old one, shall we? 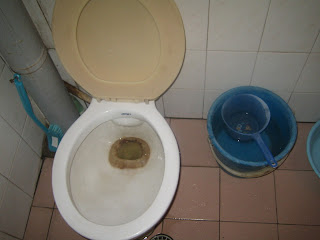 The old toilet looked like it had never been cleaned even once. I should also mention that it was so nasty the last time I saw it that I seriously contemplated going outside to find a bush to squat and pee into because it was so beyond filthy, I didn't even want to go near it. The bucket of water with the scoop next to the toilet was how you would flush it - just scoop some water and toss it into the toilet. How fun! As you can see from the next photo, there was no flusher on this craptacular crapper either... 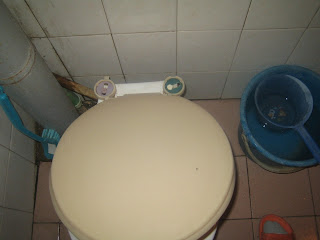 So are you ready to see the new toilet? No? Too fucking bad. Give a drum roll please, for the real, very flushable, very white and clean TOILET! 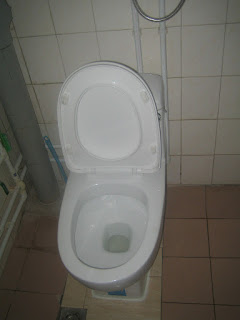 I wonder how long it will take for this thing to become as dirty and frightful as the old toilet. Probably not long since my in-laws never use cleaning products on anything. Seeing as I'm on vacation, my husband thinks it's a perfect time for us to go over there once a week for dinner so I'll keep watch for any developing stories in the can.
Posted by JQ at 9:43 PM