If Everyone's A Winner, We're All In Jeopardy!

I've been enjoying my summer vacation with my daughter, mostly inside with the A/C blasting away, far from the throngs of tourists that make the beaches here look like this: 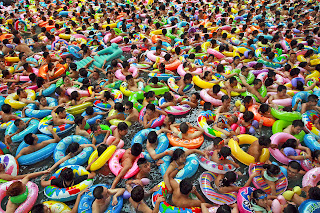 It's been fun, but of course, all good things must come to an end. School starts next week and I have to admit, I'm really sad about going back. It's not a horrible job, mind you, it's just that I've really been enjoying being home with Raelynn. She's learned so much and now talks my ear off all day long. Plus, we've worked so hard on her terrible 2's tantrums. I'm sure my in-laws will fuck that all up when I go back to work but I am hopeful she'll remember what her Mommy has taught her.

I want to teach my daughter well. I want her to be happy, healthy and successful. Of course, I don't want to see her fail or be sad. But this is all part of life, isn't it? It's up to me (and Jeremy too) to teach her how to handle her disappointments with class and to learn from mistakes she makes.

That being said, I found this article about a boy who appeared on the TV show, Jeopardy!, to be completely disturbing. In case you're too lazy to click the link, an 8th grade boy competed on Jeopardy! and made a spelling error in his answer (or, question rather, as the game gives you the answers and you are to determine what the question should have been), thus rendering him incorrect. Now everyone is up in arms about this. And it makes me furious.

Here's why:
Some time after I finished school, before heading off to college, overly sensitive people who became parents became outraged when their children didn't win at something. Whether it was not getting one of the coveted spots on the football team or cheerleading squad, or not winning the spelling bee, these parents and their kids whined and cried until they got their way. This sad trend caught on until the Everyone's-A-Winner logic became the norm. Instead of children accepting defeat graciously, these folks taught them to act like sore losers. So what if you didn't deserve to win? Here's your trophy.

So now, we've got a boy who should be absolutely thrilled that he beat out thousands of other children to get the chance to compete on Jeopardy!. He gets to be on TV and he wins $2,000. Yet, here he and his family are, whining away about how unfair it is. Oh, poor YOU. I bet if the child who won first place on this show had made a spelling error and they let him pass with the answer as being correct, this very same boy and his family would be complaining that that child should be disqualified because they spelled it wrong.

In another article (which I cannot seem to find right now), they accuse the host, Alex Trebek, of being surly when relaying the news to the boy that he spelled his answer incorrectly. For real?!? Oh, poor YOU some more!

I feel so sorry for this boy. Not because he lost. But because his parents obviously never taught him the art of losing gracefully. While I will always hope my daughter wins in the things she competes for, I know that it's unrealistic, and cruel, to expect her to. And to set her up for that kind of failure is equally as cruel. If Raelynn wins, great! But win or lose, I want her to know I love her more than anything and I'm proud of her for trying. How sad that there are people out there that don't know this.
Posted by JQ at 5:59 AM

Email ThisBlogThis!Share to TwitterShare to FacebookShare to Pinterest
Labels: Current Events, Society Down The Tubes