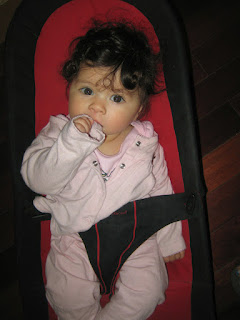 Dear GOD. That stupid woman has done it. She's broken the Baby Bjorn. She somehow broke the metal frame. How the fuck did she do that? Maybe with her crazy, moldy, rat-like fake teeth? Who knows?!? All I know is that my former worst fears have become a reality.

8pm. Bedtime for Raelynn. I scoop her up and take her to her bedroom. I put her in her Baby Bjorn chair, give her a pacifier and read her a bedtime story. But something seems off about the chair, I notice. The lights are off in her room but it's lit up enough from the lights outside of it. The chair seems awfully low to the ground. I figure she's been getting bigger so maybe I should use one of the higher settings. I take her out and adjust the chair. But when I put her back in, it reclines so far that it's almost completely touching the floor again. I inspected the chair and that's when I discovered that stupid old troll had somehow snapped the metal frame.

I yelled for Jeremy who attempted to repair it with tape. It didn't hold. As I seethed with anger, I now had to rock Raelynn completely to sleep without the chair to help ease the weight from my arms and back. I told my husband how angry I was about this and that I at least expected an apology from his mother. I'm furious because I have begged and begged him to remind his parents to take care of our things and be careful to no avail. Maybe I should go to their house and break things and see how they fucking like it. But then again, we've seen how they live so I'm not sure how much good that will do. They should fucking replace it but you know they won't because they're old as Jeremy says. His fucking excuse for everyfuckingthing they ever do. "They're old!" His mom puts the knives back with the blade up. "She's old!" My FIL makes a mess and doesn't clean it up. "He's old!" You know, chronologically, my father is older but you'll never hear my brother or I (or even my father himself) blame his age for something he does. I love my husband dearly but I am getting beyond sick and tired of hearing him defend their blatant stupidity and ignorance with his sorry blanket excuse of oldness. THAT is what's getting old.

Of course, I'm sure she'll have another golden excuse of her own. Just like when she blamed the stroller. Hey, maybe she will blame the stroller for this too.  Yes, that's it. The stroller broke the chair. Maybe the stroller will have a heart and retaliate against her as well. Go stroller, go!
Posted by JQ at 7:33 AM

Email ThisBlogThis!Share to TwitterShare to FacebookShare to Pinterest
Labels: Major Rant, MIL Problems, Thanks For Nothing, This Is Why We Can't Have Nice Things