The Stroller Did It! 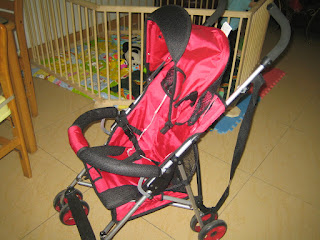 I've just come home from work, which is usually when I like to play with my daughter. But she'll have to enjoy her toys by herself for a few moments while I angrily type this post because if I don't vent and get this out, I will explode. And MIL will have broken kneecaps. But she fucking deserves it.

It's not often but some Tuesdays, we have a Kindergarten team meeting after school. We haven't had one in a while but due to many upcoming events, we had to have one today. So instead of Raelynn off in the land of naps when I got home, she was awake. Her troll grandma had her on her lap while sitting at the table. Doing nothing. Just staring into space. God, she is SO dull! After I set down my things and wash my hands, I take my precious baby into my arms and MIL starts flapping her gums.

She tells me Raelynn has a cut on her hand. I look and on the top of her left hand, I see a nasty cut. Nothing too horrible requiring stitches mind you, but it looked like it had definitely hurt her. She tells me she was using the new stroller we got Raelynn which I'm not sure why she was because I don't want that fuck of an excuse of an old lady taking my daughter in public. Raelynn deserves not to be in the company of hideous and/or idiotic people in public at the very least. How humiliating for her! But I give trollface the benefit of the doubt. Perhaps Jeremy had relayed to her that we were having trouble getting Raelynn to sit in the stroller without having a meltdown of epic proportions and she was just trying to help Raelynn get more comfortable with it.

MIL then BLAMED the stroller. "Zhe ge che bu hao," she says, pointing at it, which means "this car is bad." It's not uncommon for people here to refer to strollers as cars, incidentally. I stare at her like she's deranged. Well, for one, she is. For another, how the fuck did my daughter get cut up on that stroller? What was MIL doing wrong that Raelynn would have hurt herself on it? The stroller my husband and I bought is far better than the ugly, clunky mass of metal that MIL and FIL bought us. The one they bought us has all kinds of sharp edges. I can't find anything obvious on the one we bought. I wanted to punch her rotting fake teeth down her throat. OF COURSE she blames the stroller. OF COURSE. And of course, she finds fault with the one Jeremy and I bought because she HAS TO bad-mouth anything that makes even the tiniest bit of sense. Like that we want a stroller we can open and close easily and that doesn't weigh so much it's impossible to get up and down the 6 flights of stairs with it, a baby and a diaper bag, not to mention any other items we might happen to purchase while out and about. But now it doesn't even matter because if Raelynn just mildly disliked strollers before, preferring to be in the carrier close to Mommy, well, now she's traumatized for life on strollers, that's for sure. Thanks MIL.

It took all my self-restraint to keep calm and not scream. I promised Jeremy I would be nice but damn! She is a fucking moron! I want to tell her that the stroller is fine and it is SHE that is no good. I want to tell her I can't stand her and I wish she would go back to hiding under the bridge she crawled out from and stay there. I want to tell her I can't wait until I can pack us up to move to America so we never have to see her again. I want to tell her she is so useless she needs to hie thee hence to the nearest glue factory because even horses with 4 broken legs are more useful than she is. But instead, I think of Jeremy and I hold it all in. I do wonder aloud how she could be so stupid, but I say this in English, which she does not understand. From my tone though, she knows I am ticked off. I do not scream or make a big fuss. I do feel a twinge of sympathy when she says her heart feels heavy for having hurt Raelynn. But it quickly dissipates when I look at Raelynn's hand again. I told her she should feel bad, but again, I said it in English.

When Jeremy gets home from work, I'll be asking him to find out from his mother exactly how fucking hard it is to not maim our daughter. She should be more careful. Her negligence is appalling and I hate that I have to leave Raelynn with this incompetent fool everyday. A fool who doesn't deserve the son she has or our beautiful daughter as a grandchild. She can blame the stroller all she wants but I place the blame squarely on her homely head.
Posted by JQ at 2:51 AM