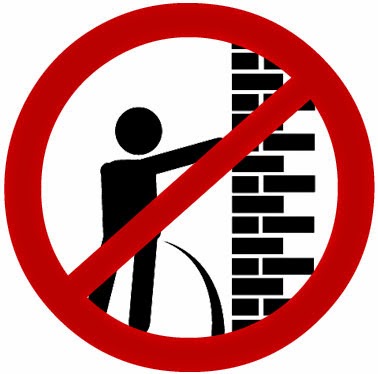 This month is already halfway over and I realize I've been slacking on the posts. Sorry, I've just been a bit pissy about certain situations that I have little to no control over and am just trying to cope with that. But as a wise (or drunk) person once said, "It's better to be pissed off than pissed on." I couldn't agree more. And I'm sure the stairs in our building would wholeheartedly agree.

For the last couple of weeks, someone has been peeing in our stairs. I've mentioned before that our building is 8 stories with no elevator. On each floor, there are just 2 units. This is very typical of Chinese buildings that were constructed 15 years ago, like ours. The first time the pissing occurred, it was on the 2nd floor landing. I saw it when Raelynn and I had come home from school and it looked like someone poured powder laundry detergent on it but had otherwise not cleaned it up.

I later found out from Jeremy who'd been informed by his mother that the people on the 2nd floor were pissed off (and rightfully so) because they were, in a way, pissed on. The culprit? It is rumored that a young boy on the 7th floor is to blame. He's older than Raelynn by at least 3 years, probably more.

Just about every day, there's been a new puddle of pee in the stairs. Once, it was between our floor and the 5th floor. The other night when my husband came home, I was busy nursing the baby when I heard Jeremy come in and put his things down. Then I could hear him going up the stairs and calling out to the folks up there, shouting about who peed all over the stairs. No one would admit to it. What pigs.

While many people here just endure stupid shit like this, including my husband on certain issues, Jeremy did not sit back on this one. He wrote out an angry note and taped it downstairs on the 2nd floor landing where the most urination has taken place. I had an inkling what it said but to be sure, I asked him and he said it basically translated to say that this is disgusting, this is our building and whoever is peeing in the stairs needs to have respect for the others in the building. He also added some mild insult at the end, according to him. I see my Miami is rubbing off on him. Passive Aggressive Notes: China Edition, here we come. I'll try to snap a photo of it. When we went for our evening walk, he didn't feel like stopping to take a photo for me as we passed it.

As we walked, we discussed the territorial pissings. If this happened once or twice with a small child, I'd be more forgiving. But this boy is old enough to hold it and old enough to know better. And shame on his parents or grandparents for allowing this. Even more shame for not going to clean it up. Let's just say for the sake of argument that Raelynn peed in the stairs. I would go and clean it up. I wouldn't just leave a big puddle of urine for everyone to step around.

Jeremy says he's going to try to talk to the mom or grandma of the boy again but I say he should wait until Raelynn makes another pee in her little potty and then quietly creep up the stairs and pour out her pee in front of their door. He made a horrified face, and I must admit that is really nasty but you gotta fight fire with fire. Or in this case, piss with piss. Hopefully the note brought out enough shame for this bullshit to stop.

I guess we should be grateful though...at least it's not poop.
Posted by JQ at 6:52 AM