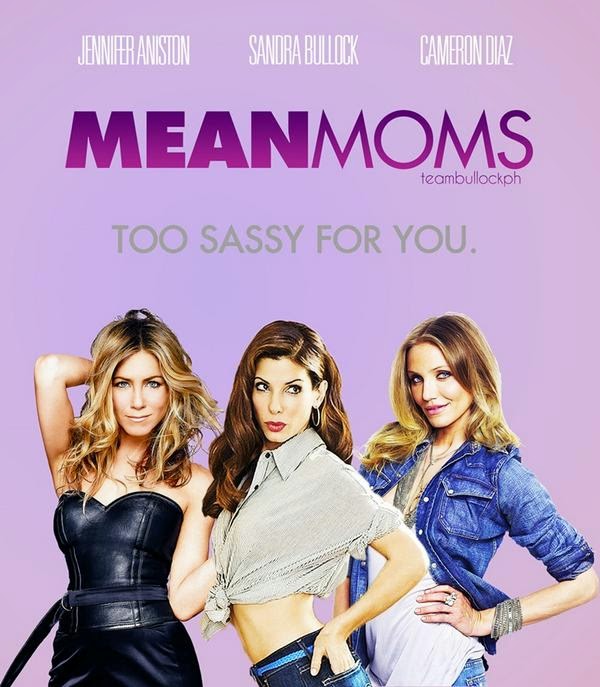 This movie will be soooooo fetch!

I have to admit it...I am TOTALLY a Mean Girls fan. Who isn't, right? So naturally, when I heard they were making a Mean Moms, I jumped for joy. Brilliant. Marketing at it's finest, targeting those of us who lived and breathed Mean Girls a decade later with the idea of being mean moms. Because that's definitely a thing. Unlike "fetch," it's happening.

Every mom has had a run-in with a mean mom. And Qingdao seems to be teeming with them. I was talking to two of my gal pals here and like me, they had also lived in Seoul prior to living here. We all have had the same experience regarding making friends. In Seoul, expats were SO much more united and friendly. But here? You could be out at a supermarket or walking around downtown and in a sea of Chinese faces, you see another foreigner! You smile and say hello politely as you pass only to be thrown an icy stare and complete silence.

Making friends here has been very difficult indeed so I treasure the select few that have made the cut. Because there are definitely more mean people here than I can believe. And I come from Miami! That should tell you something!

Let me tell you about a run-in I had a few weeks ago with a mean mom here. It happened at church services, the place where you expect people to have good manners and be kind. Or maybe we're weird for expecting those things. Anyway, let's just call this mean mom Sally Snottypants. Perfect.

Jeremy and I arrived for church while they were still making the weekly announcements before services. He led us into an empty row right in front of Sally Snottypants and her family. Jeremy sat down, as did Raelynn who was eager to go to her little Sunday school class which would start right after the announcements. I started into the row when Sally Snottypants' daughter (who is the same age as Raelynn) began coughing all over the back of my husband's head. Appalled, I ask Sally Snottypants if her daughter was contagious or had measles or anything I should be concerned about.

I should clarify here that this was before Seoul turned 8 months old. In China, they give the MMR (measles, mumps, rubella) shot at 8 months. When we'd gone for Seoul's 7 month vaccination, the nurse warned us to stay away from crowded places because there had been an outbreak of measles. I reported this to the mom friends I have at the church so they could help pass that information around to the other moms. Apparently, this was either the first Sally Snottypants had heard of it or she is even more of a jerk than I previously supposed.

She gives me a major scowl and says, "It's just a cough." Just a cough? Um, hello?!? First of all, I have a small baby with me. Surely you remember when YOUR kids were babies. I bet you didn't want people coughing all over them. Secondly, why bring your kids to church when they're ill? Stay home! And thirdly, your child coughed all over my husband. Are you unable to apologize for that?

When Raelynn was still 2, I taught her to cover her mouth when she coughed and sneezed. She almost always remembers. And you better believe that in the odd chance she forgot and coughed on someone, I would be apologizing to them AND having her say sorry as well. "It's just a cough" is not an acceptable answer.

Shortly after, the children were dismissed to their groups. I walked Raelynn out to the lobby to meet her group leader. Sally Snottypants brought her coughy daughter out after us, yet she put her in line in front of us. I was too stunned to say anything to her, so I loudly warned my daughter not to get close to anyone that was sick. "And keep your hands clean. People have germs," I caution and Raelynn nods solemnly.

I told Jeremy what happened when I returned to my seat. "What a rude lady," he comments. The next week at church, we happened to show up as the children were being led away for their groups so we quickly put Raelynn on the line for her age group. We waved goodbye and as we started walking into the auditorium for services, who should be ahead of us but Sally Snottypants? Jeremy and I loudly teehee like teenagers and he says, "Oh look! It's Rude Lady!" I bet, given the chance, he might give her a stamp or two like he did to the rude lady at the Shangri-La.

Sally Snottypants isn't the only one, unfortunately. Like the ones that are nice to my face and then refuse my friend requests on social media. And still others are just rather unfriendly. But they do serve a purpose...they remind me that I'm lucky to have the friends I have back home and just as lucky to have made some of the few wonderful friends I have here. Quality over quantity has never been more true!
Posted by JQ at 5:08 AM