Well, my last Engrish post was quite the fail, huh? I'm still shocked it's a thing but whatever. Surely this next item, spotted at my in-laws' house of vile smells, is a real Engrish deal.

For whatever idiotic reason, they have this stupid chart of fruit on their wall... 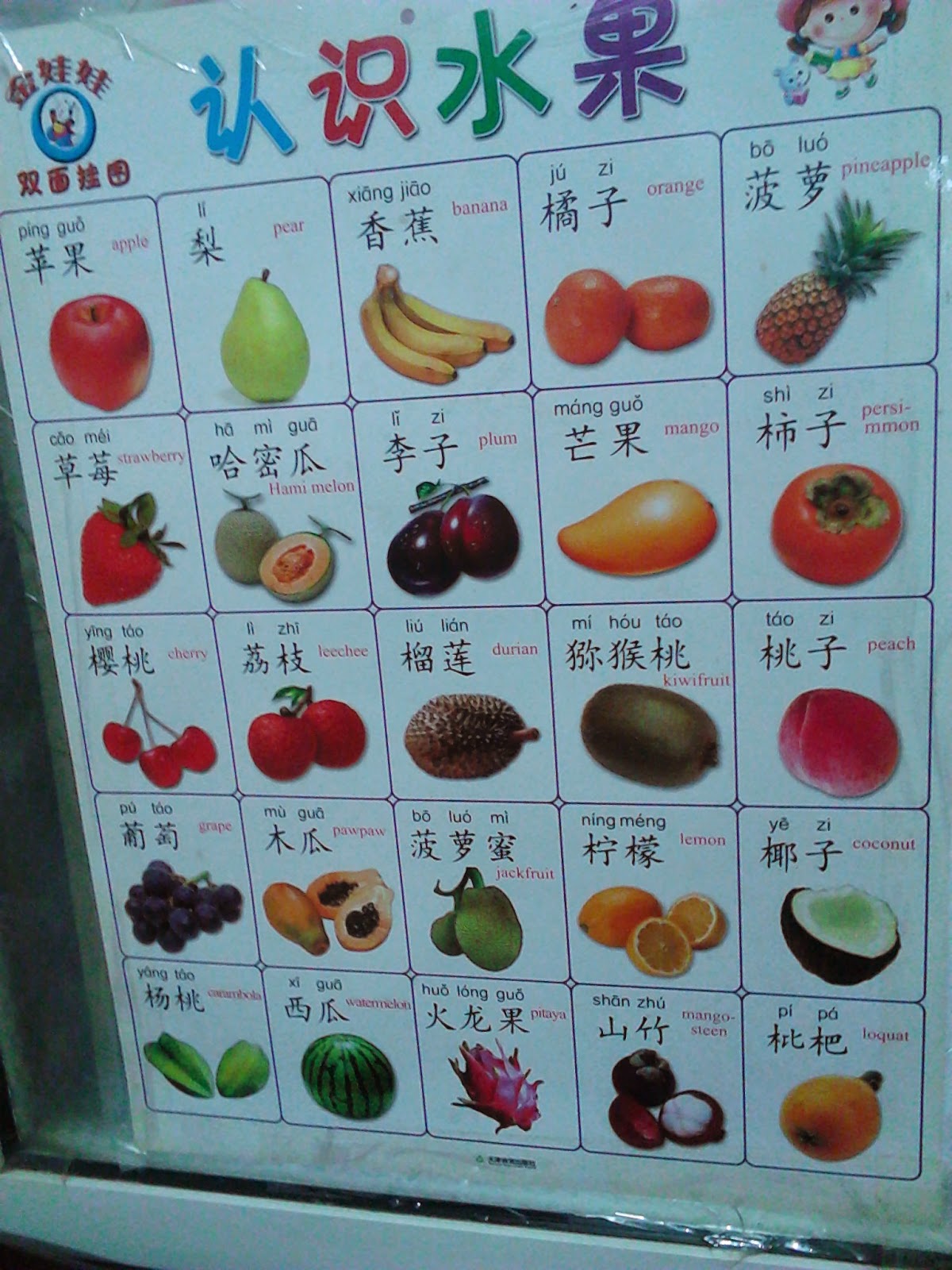 Ages ago, they had a couple different ones that they put up for Raelynn when they would, despite my protests, bring her to their stink shack while we were at work. But this one is new. I sure hope they aren't bringing Seoul over there. I can't wait to move.

Anyway, this weekend, on our way to the supermarket, Jeremy decided we should stop by their house to drop off some chicken he'd made. He promised just 5 minutes. I was not happy about this but thrilled it would be a brief pit stop at least.

I want to kill when I hear MIL's awful voice echo into the stairs, "Raelynn lai le!" she booms. Raelynn is of course happy to be there. Me, not so much. Because we're only staying a short while, I don't take Seoul out of the baby carrier. But that doesn't stop FIL from idiotically holding his sopping wet, just-washed hands out, summoning me to hand her over. While you get points for washing your hands (with soap too, no less), I have to wonder if you still have not yet figured out what a towel is for. Oh, right. You think towels are blankets. Sigh.

For the record, this was the longest 5 minutes in history. Actual time wound up being closer to 10 minutes but I honestly felt like an eternity had elapsed. Maybe because I was roasting. Now that it's officially spring, the weather is heating up. Don't mind me, my dear old Floridian friends. For now when I declare it's too hot out, I mean it's about 55 Farenheit. Yeah, I'm that person now. Anyway, because it was so warm (or hot, as I like to put it) and we were only going to the supermarket, I'd thrown on a pair of old jeans and a sweatshirt. Under the sweatshirt, I only had on a sports bra. And in this, I was sweating.

In the parts of China where heat is available (believe it or not, some parts of China, particularly in the countryside, do not have any heating!), you pay a heating fee for the duration of the heating. For us here, it's from mid-November to mid-April. The radiators are always heating during those dates. Which means that when you have an uncharacteristically warm day, it is hot inside your house and there is nothing you can do except open the windows and let the smog in. So truly, being trapped inside their home in this kind of heat made me feel like I was in the seventh circle of hell. Run for your lives, folks.

Anyway, back to the chart of fruit that I happened to glance at while trying not to break my bitchface as I endured my dippy in-laws. Something caught my eye on that chart. Come in for a closer look... 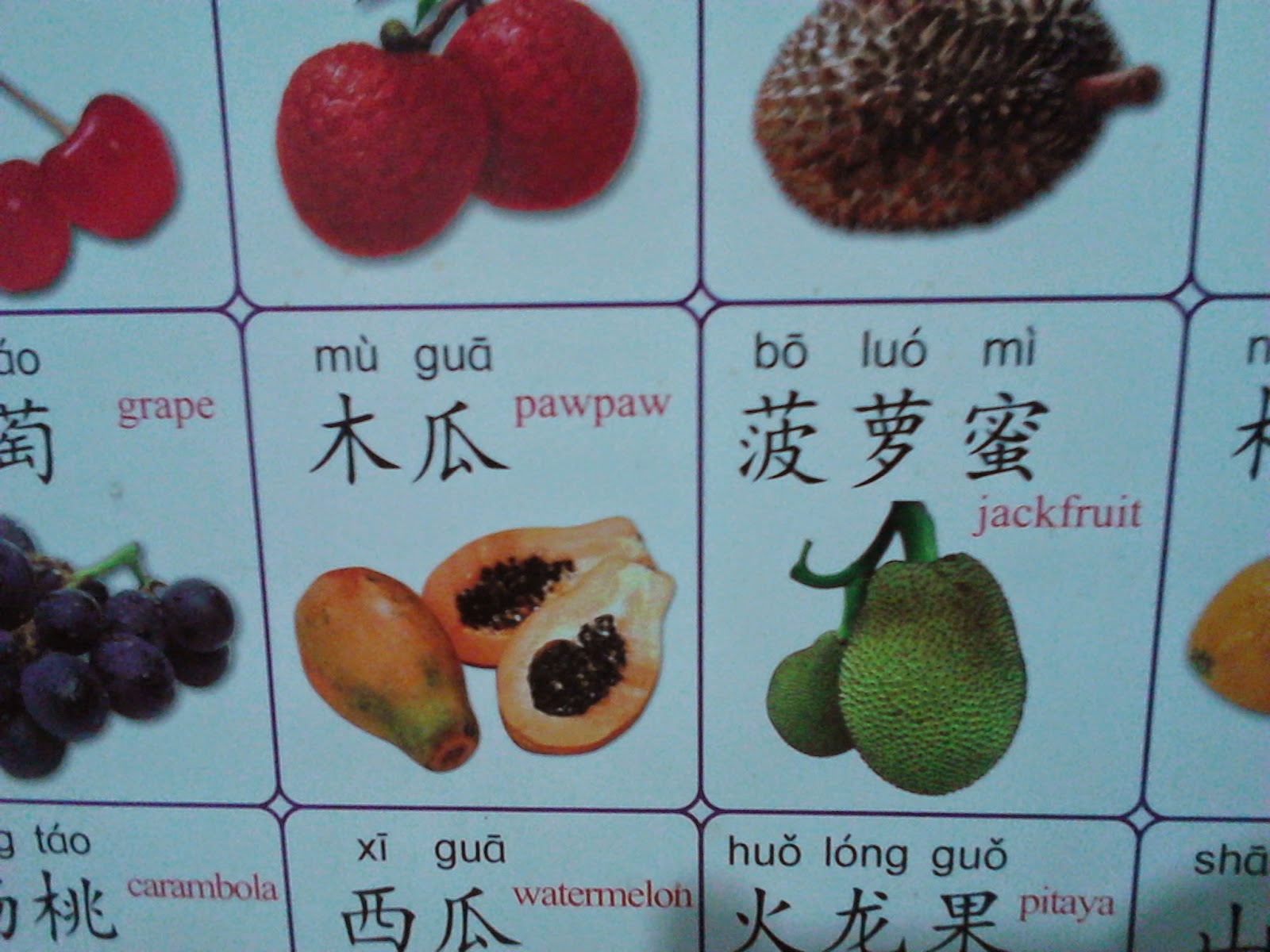 Mmmm...you know what I just love to eat? Pawpaw. I thought that thing was called a papaya. Here we go again with the Engrish. At least so I thought. After the rapeseed oil turned out to be a real thing, I decided to check and see if pawpaw was a real thing. Guess what? It's just not my week for Engrish now is it? This link here kindly explains the difference between the pawpaw and the papaya.