Giving Some Food For Thought To The Ol' MIL

Though it is excruciatingly difficult, I am working tirelessly on trying to be nicer to my MIL. I suppose I should count my blessings that she's a nice person and not some horribly appalling bitch, but somehow she still irks me to no end. Only because I love my husband so completely am I attempting this feat. Maybe this whole thing would be easier if she was a monster. Maybe not. But either way, I am stuck fake-smiling my way through her visits and trying to resist the urge to club her when she holds her arms out like a mildly touched in the head person when she wants to hold my baby. I try counting to 10 though it's a strain. Maybe I should try drinking 10 shots of something alcoholic instead.

Anyway, in my effort to be nice to MIL, one thing I'm doing is problem-solving instead of problem-making. How, you ask? Well, instead of complaining that freshly dead road kill smells better than whatever she cooked, I just cook something else myself. And of course, she needs to feel useful and helpful, so I've created a solution for those moments too. I bought her a cookbook. 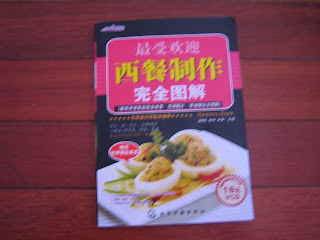 Here it is, though since I cannot read many words in Chinese, or write them for that matter, I sadly cannot credit the author of this cookbook. I think it is MIL's first cookbook because I have not seen a single one in this house leftover from when she and my FIL lived here. I'm not surprised either. But I won't make fun here. There once was a time I couldn't cook. As a child, I charred a microwave breakfast beyond recognition. And my college friends can tell you about how I asked if paper plates were microwavable (hey, I was attempting not to burn down another microwave...and if you are wondering, yes, they ARE microwavable). My mom will gladly poke fun at my past cooking retardation as well. Tired of being so inept at food preparation, I better prepared myself by reading cookbooks and trying recipes I’d find online. Today, I’m certainly not my mother’s caliber but even she would be proud of my kitchen creations of late.

This cookbook, as you can see by the 2 English words on the cover (though blurry, sorry for the lousy photos in this post), is Western-style. My husband helped pick this one out though I would have been happy to buy her one about Chinese food. This one we both liked best because it gave a range of nutritious and interesting recipes along with step-by-step instructions plus photos of everything. It seems pretty fool-proof as long as you can read and follow directions in Chinese. I know she can READ Chinese. But can she follow directions? We shall soon see as we gave her this book today.
But before we did that, I snapped some more photos of the inside because it was quite hilarious. Everything is in Chinese except the title of the dishes are also in English. Most things look and sound tasty, though you can tell this is totally written by a Chinese person with a bit of a fondness for the US. Why? Well, let’s see…

First, here are some normal things…
Chocolate cake. Mmm! That does look good! I can’t read what it says but here’s hoping it would turn out as sweet and tasty as I dream it to be. 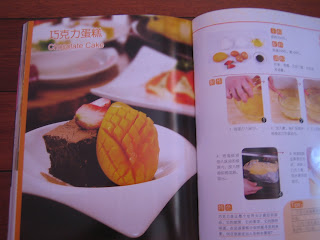 Black Pepper Beef with Vanilla Sauce. Another winner! And on the opposite page, a t-bone steak (with balsamic sauce, if I am reading the blur correctly). Still sounds nice and pleasantly normal, right? 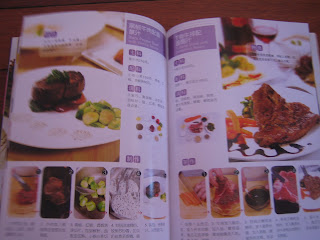 And now, for the abnormal…Cooking Small Squid with Fried Cabbage and Hollandaise Sauce. Um. Yeah. Dear cookbook author, that’s not at all something served in the Western world as I know it. I’ve never once seen squid served in this fashion in the United States. While I like squid and I like hollandaise sauce, I am a bit perplexed by this entry. Watch, I bet MIL will whip this one up first. Sigh. At least it will be better than just about everything else she’s ever made. 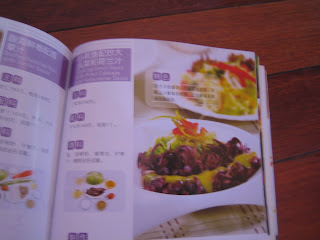 YAY! Pizza! Right? Oyster Pepper Pizza and Italian Cod Pizza that is. Oh, how wrong. Again, dear author, Americans like cheese and pepperoni on their pizzas. Sausage. Ham and pineapple. Mushrooms. Tomatoes. Onions. Artichokes. Spinach. Anchovies. Olives. These kinds of things. Americans tend to refrain from putting sea life on their pizzas. I bet she’ll make this too and think she’s making my favorite kind of pizza. Eek. 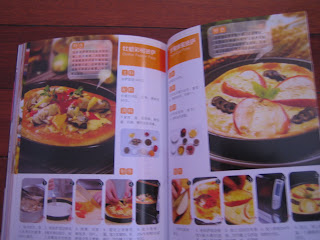 But despite these few oddities, this cookbook does have plenty of tasty-looking dishes that look (from the photos at least) very simple to prepare. It’s got potential to be a tool she can use to do something different for a change instead of preparing the same lame and uninspired meals she’s made her whole life. So let the betting begin…do you think MIL can follow directions and make some of these new dishes? Or will she royally botch it? You know what I think, but I promised my husband I’d be nice, so…go MIL!
Posted by JQ at 2:03 AM