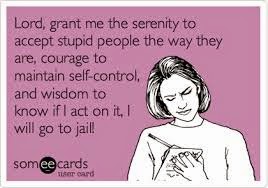 Ever since the semester started, I've wanted to write about this but I thought, hey, give the girl a break. After last week though, I can no longer restrain myself from shouting from the rooftops that my assistant is totally useless.

I know, I know. I only have 2 more months of enduring her before we move away (HOORAY!) but I seriously am about to lose my mind. See, this year is different because my sweet Korean teacher and director, Christina, has to now teach Korean to our 7 year old class AND the 6 year old class. AND be a director. So to ensure we'd have assistance when needed, the school took the cheap way out and hired another Chinese teacher. Now we have 3 Chinese teachers, one for every kindergarten class.

So what did my Chinese assistant do? Well, for one thing, she's lazy. I've said it before in this blog - Americans get a bad rep for being lazy. And there are many lazy Americans. But in China, they take lazy to a whole new level. She's supposed to take out the trash in our classroom every day yet I need to chase her down to do it. She's supposed to stay in my classroom during English time but she often vanishes and it is ALWAYS when I need her help. When she IS in the room, she's playing around on her phone. I give her tasks to keep her busy and she always does a half-assed job on them or asks me if I'm going to help her. Um, no, sweetie. I'm supposed to be teaching these kids English. That's MY job.

My annoyance with her began to grow when they FINALLY hung my boards back up in my classroom, after 6 weeks of school. There had been a lot of back and forth with the chairman who wanted new boards but decided that hanging the old ones for now was better than having bare walls. So up they went. The problem was that the wooden borders made it look worn and old and it clashed with the new wood floors, wainscoting and wallpaper. So the other teacher had made borders and I thought that was a brilliant idea. I enlisted my Chinese teacher for help. I had to nag her several times but she finally finished cutting them for me. Then I asked her to put them up. She seemed confused as to why SHE should put them up. I have class, you dope! The students aren't here to sit and watch me have an awkward conversation in Chinese with you and watch us put these borders up! Derp!

I help her with some of them during snack time. Then I have a free period and I figure she'll do more with it later. But no. She doesn't do anything else for it. I figure when she comes back for my next English class, she'll get busy on it. But she doesn't even come back there and as I teach, I'm fuming that only one of my boards has most of a border on it. Lazy cow.

I had a lot of other stuff going on so my free time was filled with those teacherly tasks. But as I knocked out each thing I had to do, my borders just sat on the shelves, being ignored. I was so angry I just slapped them up there during one class when my kids were occupied with a writing assignment.

I created a birthday board with little cupcakes for each month. I made candles with each child's name on it and put them on the proper cupcakes. She laminated the cupcakes but only because I asked her to. I also asked her to cut them out, which she did begrudgingly. Prior to this, I'd made a "Happy Birthday" sign and asked her to laminate it for me while I was in class. I didn't realize then that I should have told her to cut it as well. She just laminated it and left it on my desk. Christina and I laughed about that one.

But this week, she made me so angry that I actually left the classroom. I had to. Because if I didn't, I knew I was going to scream at her and I couldn't do that in front of the children. What she did made me realize she isn't just lazy. She is also stupid. So incredibly stupid I simply cannot fathom what it must be like to be this dumb.

When they hung my wall boards, they also hung the ones in our gallery. Each class has to make a display on it. Teachers design the display and decorate it but we must use something the children make on our boards. So I looked online and found a delightful spring idea with a tree and butterfly cutouts as the leaves. 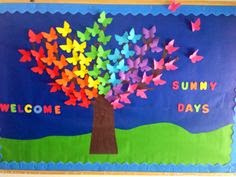 That's awesome, right? I thought it would be fun since I only have 7 students and we could see how many they could cut out. Anyway, I made a template and started tracing the butterflies so that my kids could just cut them. If I didn't have to let the students help, I would have just traced a few and then cut several at once. But that would defeat the purpose. Eventually, I was running out of time and had to go to my next class. So I asked the Chinese teacher for help.

My Chinese is not excellent. But it doesn't completely suck either. I called her over and showed her the photo above. I told her I was going to do this for my board and that I wanted the children to cut the butterflies. To be sure she understands, I point at her and tell her, "You trace these," and I hand her a pencil. Then I very sternly tell her "DO NOT CUT!" I tell her this 5 times. I point at the scissors and make the "NO" sign with my hands. And she tells me she understands.

I go and teach class and at the end of it as the children are packing up to leave for the day, Dummy trots back in holding the butterflies. She cut out every single last one of them. EVERY. SINGLE. ONE. I stare at her incredulously. What an absolute imbecile! I bet MIL was this dumb at this girl's age too.

I glare at her and tell her, "I said DON'T cut them." And she realizes suddenly, "Oh! Don't cut them!" THAT IS WHAT I TOLD YOU IN THE OFFICE! I SAID DON'T CUT THEM! GAH! But instead of shouting at her, I just stalk down the hallway to the office. Christina is in there and when she sees my face she looks alarmed. I tell her what happened and she's as annoyed as I am.

Now I had to start all over again, tracing on new little squares of colored paper because she screwed it up. She wasted all that paper, though I did turn it into hearts and made her glue them onto the border of our classroom mirror. Part of me wonders if she's really that dumb or if she just messes up everything so we'll stop asking her to do anything. I won't be surprised if Christina has her fired after this year. I don't think she's thrilled with her Chinese lessons either.

When I told Jeremy what I'd told her about helping me with the butterflies, he assured me she was the idiot here. He said I'd explained myself properly in Chinese and only a moron would have done what she did. So there you go. She's an idiot. I feel sorry for the teacher who will replace me but at least that person will have borders up on the classroom boards now. When I leave this place behind, it will be hard to say goodbye to some people at the school, like Christina, or Kelly - Raelynn's teacher. But I will not miss my lazy and dimwitted Chinese assistant, that's for sure!
Posted by JQ at 2:38 AM