I know it's been a while since I've written about MIL. I seriously and very sincerely mean it when I say I have been trying so hard to be nice and just let things go. But if you've been a reader of this blog for any amount of time, you know that sometimes I need to vent before I explode.

On Fridays, MIL knows she isn't supposed to cook. It's my night to cook. But still, she asks me if I want her to cook. I gave her the are-you-completely-crazy-or-stupid face and she nodded in understanding. Yes, go away. Now. Please. Before I throat-chop you. I've had enough of you for this week. You have no idea how hard it is for me to be nice to you or to restrain myself from hitting you over the head with my frying pan that once was nice but is now scorched on the bottom and is dirty because you didn't wash it.

I take Seoul, who is so happy I'm home that she's clapping her hands, into our bedroom and nurse her privately while Raelynn plops down on the sofa in the living room to watch Nickelodeon. I hear MIL making some cleaning-type sounds in the kitchen and then I hear her leave. Good, I think to myself. I don't have to look at that woman for 2 whole days.

When I'm done attending to Seoul, I come out and discover there's not much she's really done in the kitchen to clean up. It's the typical messes. Vegetables on the floor. Crap all over the counter. You know. Except for this... 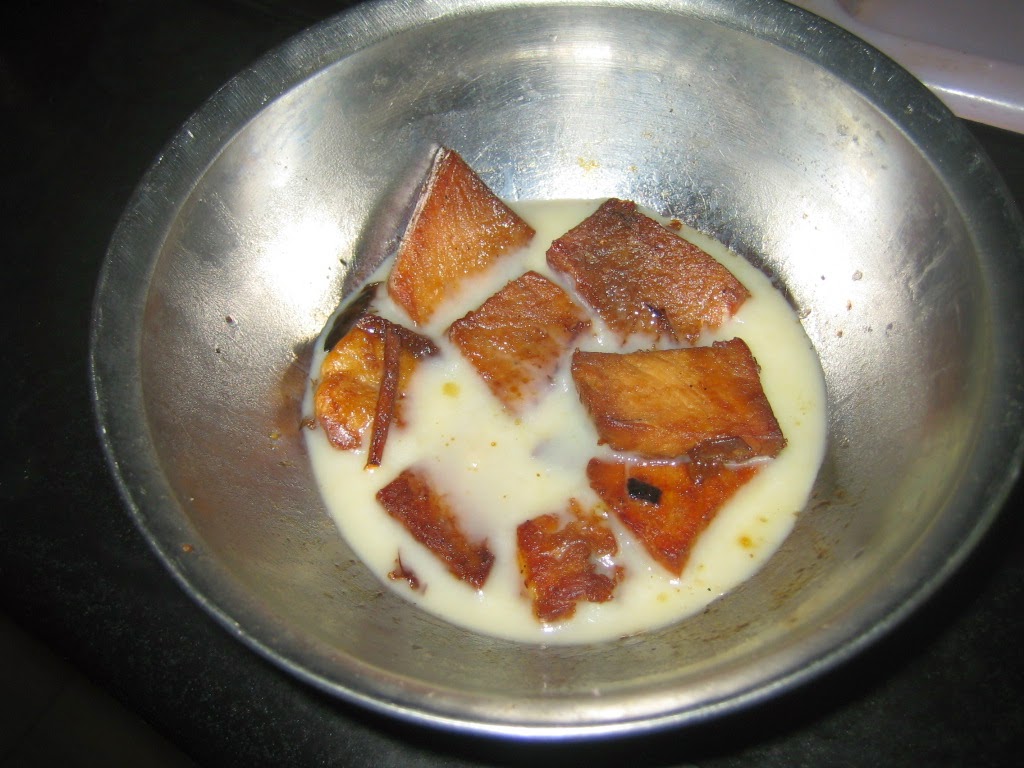 What IS this, you ask? Your guess is as good as mine. It could be tofu.  It could be meat. The liquid looks like milk but is very likely oily fatty yuckiness. She just left this nasty, unappetizing crap sitting out all day and couldn't be bothered to take it away with her. Like any of us will eat this. 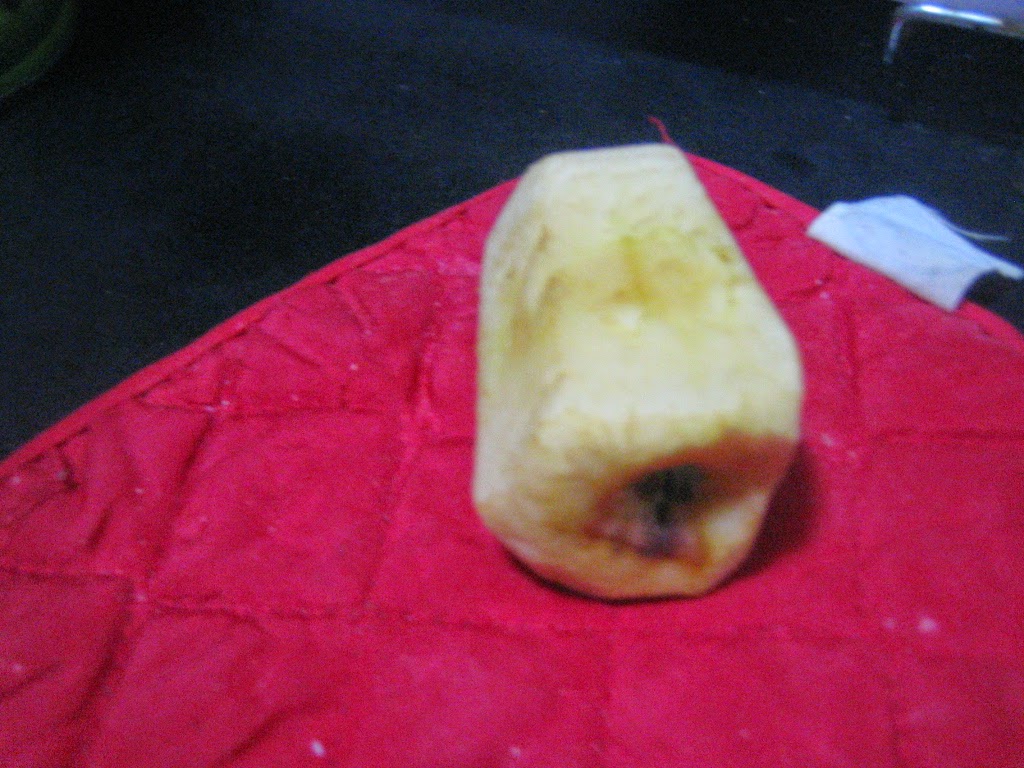 And then, for good measure, she left this apple core. On a dirty oven mitt. WHY would you leave that out? WHY would you save that? And why would you put it on something that is in desperate need of a wash?

These 2 things completely set me off and I realized I could no longer keep quiet about all the stupid shit she's done lately.

Like when she inexplicably dug through my wardrobe. Why the hell was she in there? I have no idea. But she found part of my vortex. I know this because when I'd gone into Raelynn's closet, there staring back at me were 4 of the ugliest pants ever, all of them with polka dots and all of them I'd shoved into the vortex last year. I confronted her on it and she said Raelynn should be wearing these things under her clothes because it's so cold. Not like she doesn't have a shit-ton of other non-vomitous garments to serve that very same purpose. I used Google Translator to tell her that I'd tucked them away because Raelynn refused to wear them. Before MIL could say anything more, Raelynn chimed in with how much she hated them. So take that, Goatface. Oh and yes, I also used Google Translator to tell her to stay out of my closet. Don't touch my personal items. Cow.

And of course, there are days I come home from work and I notice she's given Seoul some of Raelynn's toys to play with. This wouldn't be a problem if the toys were safe for babies. But they aren't and this is why I have repeatedly told her not to do that and repeatedly shown her which toys are for Seoul (honestly, it's quite obvious but MIL doesn't seem to grasp this concept). Yesterday, I came home and found a small box with a shower cap I'd had stashed away on the upper shelf in our bathroom now out in the living room. When I asked her about it, she told me her idiot husband, my FIL, had given it to Seoul. I just can't even with these people.

The list goes on and as you know, one thing here or there doesn't get to me but after suppressing my annoyance constantly I feel a full-on rage boiling over. Bits of luo bo left out everywhere. Insisting Raelynn eat some snack after school when she's already had one. Telling me everything is "hao chi" which is Chinese for delicious and telling me "hao chi" about everything when it clearly is not "hao chi." Putting an extra shirt on the baby to keep her warm inside the house now that Spring is here and city heat has turned off the radiators but NOT putting socks on her feet. Her hagly voice. Washing the dishes with cold water (thankfully Jeremy saw her too and shouted at her). Drinking tea out of an old rinsed out jelly jar which I don't know why it bothers me so much but it just DOES. Using so much oil when she cooks that she ruins everything she cooks.

And so the story goes. There's more of course but I just don't want to waste another minute of my weekend complaining about her. I feel better after venting, for now at least. Until she leaves another bowl of grossness on my counter that is.
Posted by JQ at 4:56 AM