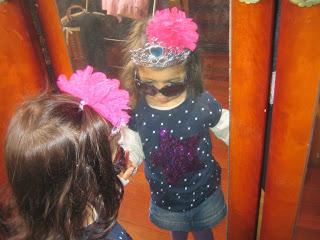 Here's a photo of the original party princess, Raelynn!

New Year's is here already (at least in China, it is). What are your plans? Once upon a time, I was out at smoke-filled bars enjoying overpriced bottle service in the VIP section of the hottest clubs until the sun came up. Now I'm lucky if I can even stay awake until midnight. But you know what? I'm happier this way. Truly I am. Though I do wish I could at least STAY UP until midnight, you know? The last few years have been like this for me. Jeremy too. We try our best. I usually fall out first though. But hey, I'm pregnant so I can (and should!) go to sleep when I'm beat.

When I think about this year, I feel like I started making some progress with my in-laws. Some. Rome was not built in a day. Neither was the Great Wall of China. But now that I'm pregnant again, I'm feeling that territorial growl rising up inside of me. The one that desperately wants to get Raelynn potty trained while I'm on my 2-month winter vacation so she can come to school with me in March. Not only do I want to remove her from my in-laws' care, I also want to keep them from having 2 children to look after at once. I'm not at all convinced they could manage to watch both children without any problems. Besides, Raelynn needs to be around other children more than just a couple times a week. I worry about this poor baby though. Hang in there, baby! I'll save you!

Which makes me think that as soon as the clock strikes midnight on December 31st, thus rendering it January 1, 2014, I am that much closer to my due date. July 2014 seems so far away now. Until the year changes and I'm actually IN 2014. That's trippy. I am trying to imagine what life will be like for us with 2 kids. And it honestly scares me a bit. I seriously fear this kid will be a boy and that I will be miserable. So my first New Year's resolution will be to just get over that. Because, yeah, boys suck and they smell. But MINE won't. Right? Oh GOD.

So, 2013. Yeah. Not a bad year. It's been fun watching Raelynn grow up more and my happiest moments from this year have been when I've been playing with her. This year, we also had a great time down in Shanghai visiting with my family, plus I got to meet a friend of mine who I'd only known online for 15 years. Good stuff! What else? I had my third kindergarten graduation. I made some new friends here. I got back in shape. We celebrated 3 years of marriage. This year was mostly a good one. I have to focus on the positive, but of course, there were a few negatives. I had a couple friends pass away this year and it wasn't easy to handle. It still isn't, but that's life for you.

Anyway, if you want to sift through your favorite A Broad Abroad (a blog a blog) moments from 2013, you can do so here for shits and giggles. And stay tuned for 2014. Because there's a baby coming. And there will be a ton of crazy crap from my in-laws, I'm sure. Speaking of my in-laws, every New Year's Day, I am forced to spend with them. It's true. It's horrible. It happens to be FIL's birthday on January 1st. But thankfully, because I am pregnant, instead of forcing us to endure their house of nasty, they will come over here. And just for dinner. So I'm at least spared having a whole day of them on my first day off during my winter vacation. Hooray! At least I can take a nap if they bore me to sleep. I was wondering how I'd endure not drinking around them. Honestly, there are some things alcohol makes better and my in-laws' company is one of those things. I might also go hungry because many Chinese food smells lately have been leaving me nauseated. Especially if MIL has cooked it. Maybe she'll surprise me though. And not in a look-I-made-you-chicken-feet kind of way, I hope. 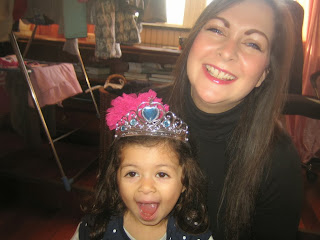 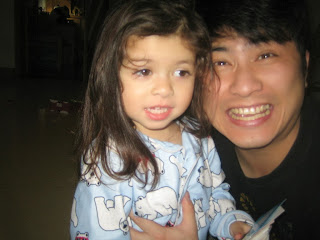