Dear MIL, The Shriners Want Their Hat Back

I take back what I said about those fucking red shoes. They can stay. MIL has proven that she can find something even more unsightly. On Friday night, we were invited I was forced  to go to my in-laws' house of dust and filth to celebrate FIL's birthday. His birthday is actually on January 1st but they wanted to celebrate it by the lunar calendar. This worked out better for me actually, since the 1st is the start of my vacation and it would really suck to have to spend my first day off with those 2 lamebrains.

When we got home though, there was no baby. They'd already taken her to their shack of shit down the street. I freaked. That old bitch probably dressed up Raelynn in something disgusting and Lord knows what kind of crap Raelynn would be playing with over there in their unhygienic household.

Just as I suspected, when we arrived, she'd put Raelynn in different pants, which I actually didn't mind. They were plain black. I approved. But she put a Snoopy shirt on top of a long sleeve polo I'd dressed her in. I should also mention that inside my in-laws' house, it is so fucking hot it's unbearable. How Raelynn could stand wearing all those clothes I didn't know. I tried to remove the Snoopy shirt but Raelynn got angry with me. God, she's one of them now. This isn't happening. They are totally turning her into a moron like them. I'm not having it.

I open some windows so I can actually breathe and it finally gets to a normal temperature in their hovel. We eat and I have to endure the shrill sounds of MIL singing stupid Chinese songs to Raelynn. No matter how much beer I drink, I can't block out the sound.

Raelynn eventually tires and MIL tries to sneak her off into their other bedroom to put her to sleep. "No," I tell her sternly. It's the only English word MIL knows. She looks at me all confused and I tell her again that there's no way Raelynn is sleeping at their house tonight. We will go soon and she will sleep in our home, where she belongs. She doesn't belong there with them.

Soon after, we start putting on our coats to head out into the cold. That's when my stupid in-laws bust out this busted hat: 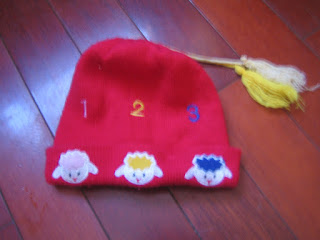 Would you look at this raggedy-ass thing?!? It looks a bit like a Shriners hat...one that somehow got thrown into the trash, dragged through dirt and shat upon. Even if it were clean, would you put this on a little girl's head??? Me neither! The kicker is MIL bought us a hat for Raelynn last year that still fits and that I actually thought was cute. It's a pink ski cap. But this thing? It looks like a cheap piece of shit hat I'd see on any of the fat, ugly baby boys around here. It is so fug. I should also point out the tassels are all ratty too. Here's a closer look: 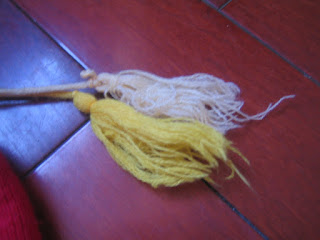 Yuck! I don't want this on my daughter's precious head! I begged my husband. I told him the shoes can stay. Hell, the faux mink scarf she got her can stay (I'm torn about how I feel about it - I mostly hate it but it looks kind of cool). The lame Snoopy shirt can stay. But this thing?!? Dear Lord! It needs to be burned. I'm tempted to accidentally-on-purpose throw it out the window but I fear my husband will get really angry and make us go to the hot springs with his idiot parents. I already told him I wouldn't go but I don't want him to be mad at me over this stupid hat. There has to be a way that we can both be happy and this hat can cease to exist all at once.
Posted by JQ at 9:28 PM