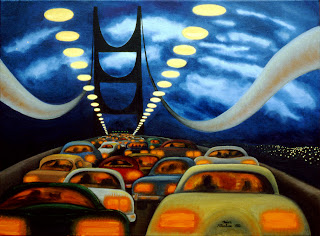 I've been meaning to write about this for a little while. I know I've alluded to this topic very slightly in a couple of my posts. But now it's on. Given the title, you've probably assumed that this is about my stupid in-laws. Well, not so much. It's about Jeremy.

You might remember that I mentioned my husband got his driver's license here. I cannot for the life of me figure out which post I stated that in so no link for you. Anyway, traffic here frightens me. That says a lot when you come from Miami where anything goes. The scariest taxi ride I'd ever had in Miami involved a driver who had picked my ex and me up down in South Beach and proceeded to careen all over the road, lit up like he'd just pushed off or something. That was even scarier than when I hailed a cab in Mexico. But the traffic here makes those experiences look like serene Sunday drives along a beach made of candy and rainbows.

My joke about Chinese drivers is that one day, a car was delivered to China. And some guy climbed in and toyed with all the buttons and such until he felt he could operate it well enough. And this guy then taught everyone around him to drive as badly as he did. If you see how people drive here, my theory makes complete sense.

Something that makes no sense to me though, in a place this crowded, with a subway almost completely constructed, is that my husband now wants to buy a car. He's buying it this weekend. I've given up arguing with him because I've been completely driven to insanity over this issue. I don't want a fucking car here. I don't even want to live here. What sucks all the more is his nosy parents told him they would pay half of whatever we paid for the car. Oh goodie! Can I just tell you we don't need their money? I, for one, don't want their money. They are always pulling shit like this so they can tell us what to do. I keep trying to give it back to them but nothing works. When I bought health insurance for Raelynn, AFTER I'd paid for it, MIL gave us 10,000 yuan for Raelynn's health insurance. Why she feels the need to try to one-up me all the time I will never know. I should just take that 10,000 yuan and apply it to our move which I am hoping to have happen within the next few years. I will move us so far away that we seldom, if ever, have to see those people again.

I strongly oppose owning a car here for so many reasons. Let me count the ways...
1) My husband has only just learned to drive. It will be like riding around with my 16 year old self. Eeek.
2) I don't think Jeremy fully gets what owning a vehicle entails. I made him a list of costs that he'd have to assume with owning a car (gas, insurance, parking, registration, etc.) but I don't think he truly gets it.
3) I loathe being dependent on people (if you know me personally, you know this quite well) so I will be agitated to sit somewhere, waiting for my husband to come pick me up.
4) When we do go somewhere, we will likely spend hours trying to find a parking space.
5) The trolls will probably pester us to drive them EVERYWHERE.
6) Jeremy wants to use the car to take Raelynn out to Laoshan which is the most boring place I have ever been. It's where my in-laws' other house is which he wants us to visit. That, my sweet husband, is not even remotely what I consider fun. How about you stab me in the eyes with chopsticks instead? That seems decidedly so much more fun than an afternoon with the goat-faced village folks in Laoshan.
7) I fear for our lives even though the car he plans to buy has been inspected and has airbags on all sides.
8) Despite his insistence that he doesn't mind having to drive me around, he'll throw it in my face when he has a bad day and needs to take it out on someone. Ugh.
9) I'd rather us rent a different apartment in the center of the city and rent this one out to someone. I'd be so much happier if we lived in a building with an elevator (oh what luxury!), where I'd at least see some other foreigners and easily be able to push the stroller down the street to neighboring malls and coffee shops. But noooo. He thinks buying the car and all the costs associated with it will be cheaper than renting. Hand me those chopsticks. I think I'm ready to jam them in my eyes now.

But wait. Perhaps there are some good points. There must be...right? Let's see if we can think of some...
1) We could use it to accidentally-on-purpose run over the in-laws.
2) I don't have to stand in the hot sun trying to flag down a taxi during tourist season, which is the hardest time of year to get a taxi. Just today, on my way to meet a friend for lunch, as I folded up Raelynn's stroller to put in the trunk of the taxi that stopped for me, some old cow (incidentally, all the old ladies here look alike. They ALL look like MIL which makes me instantly hate them all with the biggest passion ever.) and her adult son tried to start in on MY taxi. I yelled at her in English and the taxi driver, who had been a gentleman and had gotten out of the taxi to help me put the stroller in the trunk, told her to buzz off. She began to complain that she'd been waiting first, way down the street. How the hell would I know that? I myself had gone up and down the intersecting street, and not having any taxi luck, decided to take the bus. When I saw an available one come by while I was at the bus stop, I tried my luck and the taxi gods were on my side. You have vegetables. I have a baby. I win. Take the bus. Toodle-loo!
3) Maybe it has a CD player in it so we can listen to English songs. That would be kind of cool.
4) We can shop in bulk more easily. Which never really bothered me since it's an unspoken rule we have that Jeremy is to carry everything we buy up the stairs and I carry Raelynn.
5) Maybe we can use the time in the morning when Jeremy will drive me to work to talk more, which could be nice since some nights, we don't get to talk as much as we would like to. If I'm right about the costs of the car versus the apartment issue though, I can use it to find new ways to sing, "I told you so" over and over again to drive him to insanity too. Now that's a win-win!
Posted by JQ at 7:48 PM