An Open Letter To Shandong Airlines 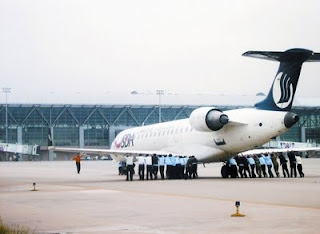 This was not our actual plane though I would not have been surprised in the slightest if they had requested us to get out and push the plane. Whoever posted this on the Picasa Web Albums site has probably refused to ever fly this airline again as well.

I'd been meaning to get this post up sooner but with the new job and Raelynn, it got buried under some other topics. I should thank whoever has been viewing My Annoying Aviation Experience post recently because it reminded me to get this done.

Some background on this:
Ever since moving to Qingdao, China, I have had the great displeasure of being booked onto Shandong Airlines (known as China Air or Air China elsewhere in the world) by my husband any time I have had to go somewhere or we've traveled anywhere together. It's been quite a few flights, actually, and all of them have been terrible. The worst experience was our last one when we returned from Seoul. Add to that what my poor parents had to undergo and I absolutely refuse to fly with these people again.

To whom it may concern at Shandong Airlines,


Over the last year, I have endured numerous aggravating experiences and inconveniences while traveling with your airline. I would like you to know that you will forever be losing my business, as well as the business of my family and friends.


Here is why:
1) Your flight staff is incapable of effectively communicating in English. You know it's bad when my husband, who is Chinese and speaks two other languages fluently, English being one of them, complains that he has absolutely no idea what they just said in English. If it weren't for his understanding of Chinese, we would have missed many important announcements.

2) Your food/snacks are just terrible.

3) The cabin bathrooms are always disgusting. Now, I can understand that hygiene in this country is different from my own, but someone should be ensuring the bathrooms aren't a complete mess. And they should have soap in them, but, like most bathrooms in China, they don't which is both gross and shameful.

4) Information is never, ever shared with your passengers which causes even more stress than you'd normally endure while traveling. For example, when my husband, infant daughter and I were returning from Shanghai to Qingdao in mid-June of 2011, the flight was delayed due to inclement weather. Now, the weather of course is not your fault. I do appreciate you not trying to kill us out there. What I don't appreciate though is how you suddenly decided to round everyone up at the gate RIGHT AFTER TELLING US THE FLIGHT WOULD BE DELAYED FOR SEVERAL HOURS and took them to a hotel to wait it out until what we presumed would be the next morning. What if we'd still been eating in the KFC a few gates away? Or in the bathroom? Or, heaven forbid, what if I'd been traveling alone? You didn't mention this in any language but Chinese. I know we're in China but Shanghai is quite the cosmopolitan city and I'm shocked that you didn't make this announcement again in English or even Korean at the very least. You take us to a hotel that looks like the sort of place that dirty old men take prostitutes. Then, we're told we get a free meal. Even though we already ate, we decided to go check it out and get a beer. Good thing we did because AGAIN we were not notified that now the flight was back on and the buses were coming to take us back to the airport. Exactly who is in charge of being this disorganized for your organization? Oh yes, and despite knowing we booked our flight for 2 adults and one infant, you put someone in the third seat in our row, meanwhile I counted several men that got all 3 seats to themselves in the back of the plane who were traveling alone. So, yeah, thanks for that. Not. Smart. At. All.


5) After our trip to Shanghai, you'd think we would have steered clear of your flights. I would have but it was my husband who booked our trip to Seoul on your airline. The flight there was mildly annoying but not as bad as our return trip to Qingdao. Severely bad weather darkened the skies around us. I was surprised and relieved to live through this flight, quite honestly, so I must applaud the pilot's skills here. Because the weather was so horrible in Qingdao, we were diverted to a nearby airport to wait it out. We figured we would sit at the gate and wait until the weather cleared up. BUT YOU MADE US ALL SIT ON THE PLANE WITH NO AIR CONDITIONING! I was so happy I didn't have my baby with me because she would have been as miserable as we were. You said we would be taking off again 'soon' but your definition of that word is completely different from the actual meaning that word holds because we sat there for nearly four hours total. I could have walked back to Qingdao faster. Also, you promised us a meal and water while we were stuck there, trapped like sardines in a can, enduring the same 5 lame songs you play when people are boarding or exiting the aircraft. You left that music on for about two hours too. Then, after promises of food and water, you finally deliver! Only the 'meal' was merely a snack that consisted of: a tiny loaf of bread, smaller than the size of one mini-muffin; some strange pickled vegetable in a small bag; a small bag containing 5 tiny pieces of dried fruit and two vanilla sandwich cookies (which, coupled with the dried fruit, were the only things I found edible). By some small miracle, after all this torture, we are finally granted clearance to take off. We were surprised and thankful to be alive and safe back in Qingdao.


That was actually our most recent and final flight with your airline. The final element in our decision to never fly with you again was when my parents came to visit us from America. My daughter is their first grandchild and though they had been to China before, they had never been to Qingdao. My parents booked on Delta to get to Shanghai. Then from Shanghai's Pudong Airport, they had to transfer to your airline. It is a very good thing they arrived in Shanghai the evening before they were to fly to Qingdao. It's an even better thing that they stayed at a nice hotel because the concierge helped them to confirm their afternoon flight with you early that same morning and you had, for absolutely no reason (at least none that you would provide) canceled their flight. My parents were lucky enough to get a flight with Juneyao Airlines, who I suspect will be taking most of your business from here unless people truly enjoy having their travel plans ruined, that arrived just a couple hours after your flight would have. And again, 2 days before my parents were to depart, you canceled their flight from Qingdao to Shanghai's Pudong Airport. This time, thanks for actually notifying your passengers. My parents were very stressed out by the change because the flight from Shanghai to Atlanta, Georgia in the United States only goes twice a week at this point. And again, they booked a new flight to Shanghai with Juneyao Airlines and had no more delays or aggravating experiences, except for the annoyance of having to leave a day before they originally planned in order to connect to their flight back to the states. Yes, it is because of your inept service and flight schedules, my parents' stay in Qingdao was truncated.


So, Shandong Airlines, I bid you farewell. I don't care if your flights cost half of what Asiana, Juneyao, Korean Air or any other airline in this area cost. My family, friends and I will never board your planes again.


Sincerely,
Jennifer M. Raskin and Qu Xiaolong
Posted by JQ at 12:18 AM