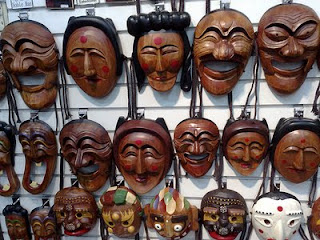 My husband and I love watching Korean dramas. It is something we did nightly while living in Seoul and now that we have access to Korean channels here, we proudly continue this tradition. Korean dramas are just so juicy and over the top. I couldn't help but get into them.

But there is one type of Korean drama I just can't get into. And that's the Korean drama at work. Since I started this job, there is always something they just have to muck up with their ideas about something. They want the school to truly be international but some of the things they're doing are just, well, dumb. It turns into a big dramatic showdown during our meetings where us foreign teachers are sticking together and trying to explain to them why their ideas are nice thoughts but are simply not going to work.

Like the most recent drama which was, ironically, about drama. If you've been reading my blog posts, you'll know I am teaching kindergarten for a Korean school in China. That means 1) my students are very young at 6 years old 2) they are Korean 3) they are learning English AND Chinese as well as how to speak Korean better. The director and principal had thought they'd try to be cool and update the curriculum. In it, they added drama. Because they'd made this change (or "changie" as they say it) long after I'd departed for the day, they took the liberty of adjusting my weekly schedule I'd already submitted to reflect this. On said schedule, they had put "Library Time & Writing" on Tuesday and "Library Time & Drama" on Thursday. I figured that on one day, they wanted me to read to the children and have them write something about the story we read and on the other day, we'd read a book and act it out after. That would have made the most sense so of course, that was wrong.

What DID they want? Oh, for me to teach them a play. Yes, teach children who are just learning English to ACT in a play to perform at the end of each month. We're talking a classroom full of 15 small children with only 3 who can really read very well in English. I actually had tried to do this thinking it would be fun. But it was what I imagine kindergarten in hell would be like. The children were restless and bored and who could blame them? Even with a short play that I'd edited to be even shorter and simpler was of no interest to them. ALL of them, even my best students, used the paper I printed it on to draw pictures while I was going around the room helping the children with their lines. It seemed to me cruel and unusual punishment for children that age.

I relayed this in our weekly meeting while my friend Genesis, the other Western teacher in kindergarten with me, stood her ground as well. Even Lane thought the idea of teaching children so young to act in a play in a language that isn't their first language is the stupidest idea he's ever heard of. Lord knows what will happen next. Hopefully, they will drop it faster than their other brainless scheme that never made it - to have Genesis and me catalog the kindergarten library in our "free" time. That was shot down faster than you can say "what the fuck!" It's only a matter of time before they come up with something else equally as annoying. Until then, I'll finish enjoying my drama-free three-day weekend thanks to the mid-fall harvest day, celebrated in both Korea and China.
Posted by JQ at 8:30 PM