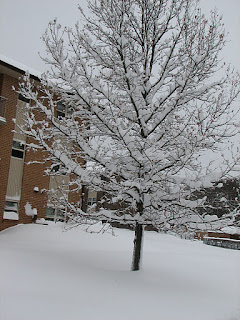 Unfortunately, it did not snow THIS much. Yet!

It seems that the one semester of meteorology I took in college paid off. Last week, I accurately predicted snowfall for Qingdao. The weather report said nothing of the sort. But because I knew it was going to rain and the temperatures were rapidly declining, I turned to Lane and said, "It's going to snow." He didn't think it would. Then, at work, I saw it. Soft, white flutters descending from the sky. I screamed with joy and my students all jumped up and ran to the window, pressing their little noses and hands against the glass.

When it comes to snow, I am as excited, if not more so, than a small child. My friends back home find this odd, since I spent my entire life (prior to the last few years) living in South Florida where it of course never snows. I never actually imagined myself living in a snowy place before. I always enjoyed visiting snow, but I hesitated at the thought of living in it. I had way too many friends who'd bitch about having to shovel snow, dig their cars out of the driveway, scrape ice off the windshield, put snow chains on their tires and all those other snow-dulling activities. Why not just sled to work?

The trick is that, in order to enjoy snow with the wonderment of a small child your whole life, you must live somewhere that you would never, ever drive. Where public transit or taxis can get you to and from your destination du jour. Then you can be like me, squealing away, as though I've suddenly been turned into my younger self just like those old Shredded Wheat commercials.

When I see snow, especially when it is falling, despite knowing HOW the weather phenomenon of snow occurs, I can't help myself from finding it to be so magical and special. It's so graceful as it blows about. Even when snowing heavily, it is almost poetic as it floats from above. To see it makes me giddy and bouncy wherever I am. It feels like Christmas morning and I've gotten the kind of presents I dream about. I smile at everyone I see as I walk along.

It snowed on and off today from lunch time on. I went outside several times to marvel at the falling snow. And when I left for home, it began to snow again. I walked down the hill from school to a big main road and suddenly, the snowfall become quite heavy. But I didn't mind. I was too busy twirling about in it, admiring this perfectly pretty form of precipitation. Moments before, an available taxi had waved me away as if to say he was off duty. But then when the snow began falling hard, he opened the door and called to me, "Zou!" Which meant he'd changed his mind since he was telling me to come to him. When I got in, he told me in Chinese that he would have felt badly leaving me out in the snow like that. But it truly wouldn't have bothered me.

Instead, I enjoyed the rest of the snow in the company of the kind and chatty cabbie who was impressed with the American gal doing her best to speak Chinese. I'm always happy to get a driver like this so I can get more practice speaking Chinese. When I told him how much I loved snow, he put my window down while we were waiting for a light to change. Much to my pleasure, snow blew right into the taxi.

It snowed the whole ride home. I have never run up all 6 flights of stairs here before, but there is a first time for everything. Powered by snow, I bounded up the steps and burst through our door where Lane and Raelynn were waiting for me. "It's snowing! It's snowing!" I cheered. I grabbed Raelynn and brought her to the window, opened it slightly and explained to her curious, angelic little face what snow was as it wafted into our faces.
Posted by JQ at 2:55 AM