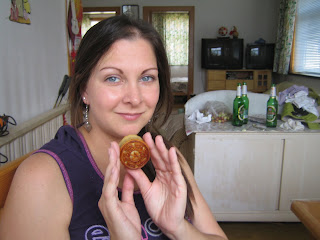 Mooncakes are my favorite thing about this holiday, even though they would most definitely taste better if they were filled with oozing chocolate. And yes, behind me is the in-laws' living room. You can see some ugly curtains and some weird foam thing around the light switch plate that was similar in style to the hideous one they had up in our living room.

This weekend, I was happy to enjoy a three-day reprieve from work instead of just two days thanks to the holiday for the fall harvest. In Korean, it's called Chuseok. In Chinese, it is called Jong Choe Jie, though I might be spelling that wrong. Yes, I am married to a Chinese man but he'll sigh impatiently and sound it out again while giving me the stink eye as he expects me to suddenly and miraculously turn into a master of the complex Chinese language in under a year.

Despite having more weekend to enjoy, part of it was automatically sacrificed to the harvest gods for my husband had arranged for us to go out to the countryside where his parents live for lunch. This is their version of Thanksgiving and it's a family day. And like it or not, his parents are part of my family now. So off we went on our excursion into the land where there are no other white people. Or malls. Or even KFCs (which is huge over here. They seriously have a KFC on just about every corner in Qingdao). Or anything, really.

The bus ride took forever. I definitely have a new appreciation for MIL's daily journeys here to watch the baby. Though she WANTS to see her grandchild. It's not like we're asking her to schlep all the way out here to scrub the house, which we all know she is completely incapable of anyway. There is no direct bus there either. We had to take one to some big park and then hop on what I'd like to call the country bus. I didn't take any photos for I was too busy keeping the village folk from touching the baby.

As we neared our destination, I grew alarmed. People LIVED out HERE? Ugh. To each his own, but honestly, whether here or back in the states, I could never be a country girl. I need vibrant city life closer than that. Or at very least a big mall and some coffee shops in the suburbs. But here? I leaned over and told my husband that if this was where he'd brought me to live when we first came to Qingdao, I'd have been on the next plane out.

But it's not actually Qingdao. It is way out there on the outskirts. It is an hour and a half from our home. Once the bus screeched to a halt at our stop, Lane ushered Raelynn and I off the bus and onto a tiny street with one lane going each way, freckled with produce peddlers and rundown buildings. Not one skyscraper in sight. I was not at all surprised when he lead me to his parents' building. It looked almost identical to ours but for the color of the building and the surroundings. Of course all the property they own would be the same! How silly of me!

We climb a million stairs, just like we do at our house, to get to their apartment. I have to say I expected it to be much more disgusting than it was. I pictured a floor made out of dirt, a fire pit in the center and a hole in the ground for a bathroom. But it had walls and a functioning bathroom. Who knew?! However, the floors were gritty as though they hadn't been swept or mopped lately. And the blankets she had topping the couch probably hadn't been washed in a while either. The kitchen was much smaller than ours. And what surprised me most about it was that it wasn't even a fraction of as disgusting as our own kitchen was when we first moved into our home. It looked like MIL had made an extra effort to clean up so I wouldn't complain, which was a wise move on her part. She had vegetables all over the place though, just like in our kitchen before we made her stop doing that, but the area around them was clean. Then again, she also had stored some vegetables outside the door on the stairs, but because they were still in their bags, it was obvious she'd just bought them from the market so I'll give her a pass on that.

I was not all surprised when I discovered they didn't have A/C in their house. Annoyed beyond belief, but not shocked. Those two. How they live like that is beyond me. Thankfully, it is cooling down now as we get into autumn but they had the windows closed. So of course, Raelynn began shrieking as is her custom when it comes to being in places where people are too stupid to open windows or use A/C. Luckily, there happened to be a good breeze going and with the windows open, it became a much more tolerable temperature in the house. 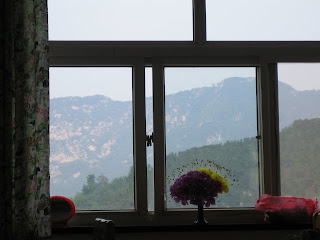 A view of the mountains and the now-open windows.

We sit and drink tea while his mom attempts to prepare some food. She did an alright job though her cooking still leaves much to be desired. We eat and drink for quite some time, just like you would for Thanksgiving in America. Only everyone is speaking Chinese. After many beers, I'm less agitated about being there. My husband took advantage of the opportunity and took me up to the next floor. His parents also own the unit above theirs and wanted him to show me. No A/C in there either. But everything else WAS in there. I had been wondering where my in-laws had shoved all their crap they'd had in this house when we moved in and consequently asked them to take home so we could fit our things and make room for Raelynn. Now I know. They put it all in there! And while we're there marveling at all the crap, my husband tries to sweet talk me into staying the night. Oh no. No, no, no, no, NO.

Not happening. I tell him as sweetly as I possibly can that there is no way in hell I am staying there overnight. I didn't even want to go there in the first place but had to because this holiday is important to them. So I went but staying the night was where I drew the line. We bargain on a time for leaving. It's 3pm. We finally both come to an agreement on 5:30pm for catching the bus back. But my husband isn't done with the torture. As he pours me more beer, he puts me in a horribly uncomfortable position by asking me to let his troll of a mother take the baby for a walk by herself. Her? Why does she deserve to be seen with my beautiful daughter? My husband explained that since we were in their neighborhood and since his mother won't shut her snaggle-toothed piehole about her grandchild, she feels the need to show off. Now I'm angry. I should let this woman who I don't much care for who watches my kid all week long despite I think she's incompetent now take our treasured baby out in public alone? Even my husband has asked her to never leave our house with Raelynn and now he wants her to go bragging to her crusty farm folk about our child! 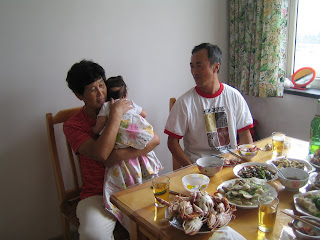 My in-laws and the baby. 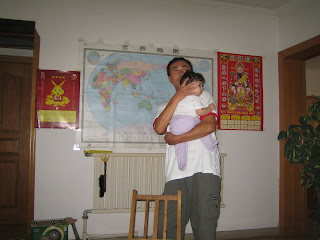 Here's my father-in-law with Raelynn which I took a shot of as a cover to capture these "lovely" decorations. This, incidentally, must be why Lane thinks that taping a large map of the world up to the wall is lovely decor. Also, check out the cheap Chinese posters flanking each side of it. Their style in this home is just the same as it was in our home before we ousted everything in that it truly looked like they snagged the adornments from random Chinese restaurants.

I allow it only because my father-in-law will go with her too and because if I say no, I look like the biggest bitch in all of creation. As soon as they leave, I cry and I let him know exactly how I feel about this. It pisses me right off that his mother's vanity is more important than the baby's safety, especially since she should attempt to dress and style herself better if she's so concerned what people think about her. And shower more often too while she's at it. I've only consented to their taking a 10-minute walk with Raelynn and I have my eye on the clock. But before 10 minutes can even pass, from one of the open windows, I can hear Raelynn crying for me outside. And moments later, MIL has brought my precious angel back to me. She stops crying as soon as I hold her and I resist the urge to say, "I told you so." 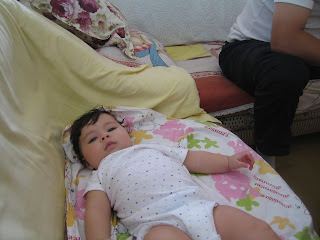 Raelynn lays atop her blanket which separates her from the musty blanket that is covering the couch which didn't seem as though it had been washed in some time. Also, look at the top of the photo and you'll see the barfy grandma-style flower pillows have found their way home!

As 5:30pm nears, I start rounding up our things. But now my husband wants to stay until 6pm. That did it. I spent the whole day smiling politely and trying to remember that this is my husband's side of the family and I must do my best to be nicer to them. Seeing that he's pushing the boundaries too hard, my husband also realizes that if I don't claw his eyes out for this, he's not being fair to the baby who needs a bath when she gets home and needs to be put to bed soon after that. So off we went, leaving the village people behind. The mountains there were indeed glorious but I can see mountains from our windows. I think I said it best to my husband's aunt who asked me how I liked the countryside and would I live out that way. I had my husband politely tell her that there was no way I'd ever live out there because it is too far from Starbucks. 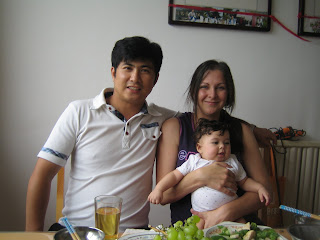 Happy Mid-Autumn Harvest y'all!
Posted by JQ at 3:43 AM