The Face Of Death 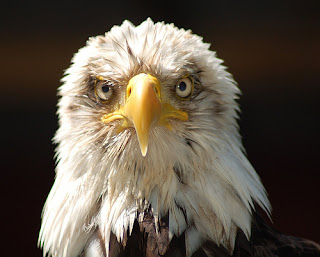 Birds always look pissed off. Just like this eagle here. Look at this fantastic creature. It has truly mastered the Face of Death. This look right here says, "Go ahead and try it. I'll peck your fucking eyes out, bitch."

I want you all to know that I have seriously and sincerely been trying VERY hard to be nice to MIL. On paper (or even on computer screen for that matter), it seems simple enough. She's a nice person. And who wouldn't like someone that makes you delicious dumplings and wontons whenever you request them? Or watches your child for free? I must sound like a raging lunatic when you consider these things.

But then, there are the things she does that just pile up, like one smelly shit-caked diaper after another until it overflows with an overwhelming pungency, permeating every molecule until everything is essentially shit. Things like unplugging the refrigerator, breaking the Baby Bjorn chair (which had a fucking metal frame!), blaming the baby for things, that blasted knife with the sharp end pointed up, and let's not forget how that cow tried to intrude on my private time with Raelynn during my summer vacation because she thought I couldn't possibly manage to make food for my own daughter. Yeah, her dumplings and wontons aren't THAT good that I should have to endure this kind of shit.

As this new semester has gone on, I have really, truly tried to be polite when I see her homeliness enter our home before I head off to work. When I come home, I try to smile big and greet her too. But as all this annoyance builds up again, I am ready to burst from suppressing my rage. Each thing individually seems like no big deal. But add it up and here's the running total so far from just this week: left a container of food uncovered sitting in the steamer on the stove for God knows how long (and incidentally, it was one of the worst dishes she cooks and I have no idea why she ever makes it when she actually does make other good dishes); gave Raelynn something she shouldn't play with so that when I confiscated it, she had a meltdown; lets the baby destroy anything and everything; somehow hit the kitchen faucet so it's loose and now water leaks out from somewhere onto the fucking floor and my husband insists NOTHING is wrong with it (I should really write about this issue separately, quite honestly); wore the same ugly socks 2 days in a row; wore the same clothes 3 days in a row; left garbage in the stroller; talks nonfuckingstop from the moment she arrives and just won't shut the fuck up. That last one is really severe too. She just gabbles on and on and on and on, as if she's trying to make Raelynn sound just as stupid as she is. Don't get me wrong. I want Raelynn to speak Chinese. BUT I want her to speak it well and be educated, like her father. Not like this idiotic troll.

Today in particular, she did something that set me off completely. All the grievances listed above swirled about my head and I'd just had enough. As I opened the door, Raelynn ran up to greet me as is her custom. And she usually follows me about as I put down my things so I can then wash my hands and pick her up. But that old hag wasn't satisfied with having my angel to her troll-self all day for she picked her up, talking loudly over me while I was speaking to my daughter. That's when I gave MIL the Face of Death. A stare so calm and angry, it induces fear in whoever sees it. If my kindergarteners have been especially naughty, they too will shiver in terror when I look at them in this way. I didn't yell, but I did sound annoyed as I complained aloud to myself how I couldn't believe the balls this witch had for not only keeping my daughter from running up to me but also for blabbering on and on and on while I was talking to her. The Face of Death worked because she promptly put Raelynn down, closed her flapping gums and hit the road.

Jeremy, who had been outside on a business call, came back in a short while later. I guess MIL ran up to him and told him about the evil stare I served her when I came home because the first thing he asked me was if I made a face at his mother. I had to try not to laugh. She's tattle-telling on ME? Seriously? Oh that's rich. My husband admonishes me about being polite and I remind him that it's quite rude for her to pick up my daughter when it is my time with her and even more rude to keep talking OVER me when I am talking to my daughter. Well yes, but don't make faces at her. Oh I know...because she's old and frail and my having made a face at her will make her heart stop. Give me a fucking break. She is 10 years younger than my dad. And 10 years older than my friend Andrea who you would NEVER guess is 50.

I hope MIL always remembers that look I gave her. I hope it is burned into that tiny pea-brain of hers so that she never forgets that this is MY house and my daughter and my little family and I am in charge here. If she wants a place in my heart, she needs to fucking step off a bit and quit intruding. And for God's sake, stop tattling like one of my students. Even those kids know better.
Posted by JQ at 7:36 AM