I have to say it: our head lunch lady at school is a total bitch. In fact, the title of this post will be my new moniker for her from now on: Lunch Lady Bitchface. If only she were more like Lunch Lady Doris (rest in peace, Marcia Wallace).

But she's not. She's truly a horrid beast.

Lunch Lady Bitchface is always yelling. In Korean. In Chinese. All she does is yell. Every time I see her, I must resist the urge to beat her fat head in with a lunch tray.

Why do I despise her so?

It started last year when our annoying Korean director, Lesley, was still in charge. At that time, our kindergarten children ate lunch in the classrooms instead. The lunch staff would bring us a big box of food and we were stuck serving it to them. One day, Lesley neglected to tell Lunch Lady Bitchface that we'd gotten a couple new students and they needed to send more food. So as we were serving it, Christina (my Korean teacher) and I discovered we were short some food. She was busy putting the food on the trays so I ran down the hall to tell Lesley so she could get one of the Chinese teachers to help me get more food.

Lesley, Eun Ah, and 2 Chinese teachers (yes, that is 4 people) were serving food to the smaller children. There were not that many children to serve but Lesley told me to go up and get the food. I stare at her, bewildered that I have to do this. But if I don't, some of my students will be missing food from their trays and Christina and I won't get to eat. So up I run to the cafeteria. That's when I try to explain to Lunch Lady Bitchface that we're missing food. And she screams at me. SCREAMS! Like, really, bitch? I hate her. Thankfully, my friend and English boss, Patrick, was right there and helped me get to the bottom of that mess. Lesley wound up getting in trouble for that one (served her right) but ever since, Lunch Lady Bitchface has always been a total twat every time I see her.

This year, our children eat in the cafeteria. It's easier for the Korean and Chinese teachers who now don't have to clean the classroom after lunch, you know, because we have cleaning ladies who don't do anything but mop the floor with toilet water. They're too busy doing that of course. Eating upstairs is a bit nicer, I'll admit, especially since the Chinese teachers put out all the trays and food. Which means I just have to get my kids upstairs, have them sing their lunch song and then I can start eating too. Most of the lunches are pretty blah. It's Korean food, which I love, but just like American school lunches, it's not very good Korean food. Some days though, Lunch Lady Bitchface surprises us with a stellar meal. And last week, she dished up some killer dumplings and a rice porridge soup with chicken in it. The rice porridge sounds kind of bland, and usually it is, but it was very cold outside and I love that stuff in this weather. It warms you right up. Also, there were 2 sauces being served with the dumplings that could easily help jazz up the porridge.

The sauces were on a common table where teachers and older children can serve themselves some kimchi and other various side items, like pickled radishes. I took a spoonful of each sauce and poured it onto my tray. As I ate, I practiced my poor Chinese speaking skills on Wang Laoshi. We were enjoying the dumplings. She tells me I can go get more if I want. And I think that sounds like a great idea. After all, it's not every day that lunch doesn't taste like old shoes. So I take my tray up and before I can even ask for a few more dumplings, Lunch Lady Bitchface begins shrieking at me.

She's screaming like a banshee because I have put both sauces on my tray and she thinks I have used too much sauce. Yes, really. I want to throw the spicy sauce into her eyes but I just stare at her, partly amused and partly pissed off. There is a ton of sauce - more than enough for all of the students and teachers in the school - on the common table. She is SO weird like that. Once, the Chinese teachers got a small soup bowl and filled it up with kimchi for us all to share and Lunch Lady Bitchface came over and bitched at us about that. She was telling us not to waste it. We weren't wasting it - we were all eating it! My God! She is China's Soup Nazi, now isn't she? Or rather, the Sauce and Condiments Nazi.

As she shouts away, I tell her to relax because I'll be using the sauce in the porridge. My Korean teacher, Christina, happens to be behind the counter because, for whatever reason this year, the cafeteria workers don't serve the food anymore and they have the Korean and Chinese teachers take alternating shifts every other week. She gives me a sympathetic look and I tell her I think Lunch Lady Bitchface is very rude. I tell her I'd like some more dumplings and Lunch Lady Bitchface gets all huffy, like there are not thousands of dumplings up there, and like my own Chinese teacher didn't just stuff her face with about 15 of them. I had only been given 4 initially. Lunch Lady Bitchface starts screaming again and Christina translates even though I understand her. She wants to know how many dumplings I want. I should mention that most of the time, I cannot understand Lunch Lady Bitchface. Why? Because she screams so loudly and speaks so quickly that I have no idea what she's saying. She almost sounds like the Crazy Cat Lady from The Simpsons. 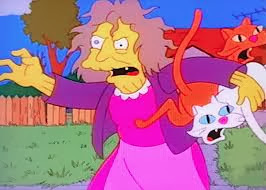 Fearful of asking for too many to cause her to become even more bitchtacular, I tell her I want 3 more please. And she throws them onto my tray. Because of course! She's Lunch Lady Bitchface! I hope that evil woman gets kimchi seasonings in her eyes.