The Great Wall Of Qingdao

For those of you who have never been to China, the Great Wall is actually just outside of Beijing. That's north of here, about an hour by plane. We went last January, which you can read all about here. In Qingdao, you might be surprised to find that we have a wall of our own. A much less captivating and remarkable wall, to be sure, but we have one that we drive past every day on the way to work. It always seems that everyone wants to climb it. Or down it, to be more specific, to the sidewalk below. Let's have a look: 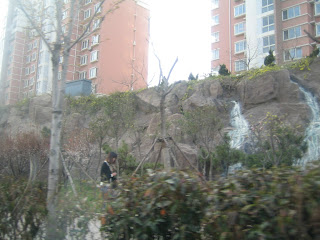 You'll notice some large apartment buildings at the top. If you live there and you don't have a car, you need to take the bus. There's a stop right along this road. But there's no exit from the apartment complex to this road. The exit takes you to the other road that completes the corner this complex sits on. So for people who want to take the bus and are too damn lazy (or late) to be bothered with walking to the exit and walking around the corner, they just scale down this wall. Yes, really.

Regrettably, I have been trying for a few weeks to snap a photo of someone in action climbing down the wall, but it's much harder than it looks. The traffic isn't too heavy on this road so it's not often we're slowly inching along to the light at the corner. I have to act fast and most times, we're moving too fast to tell what I've taken a photo of.

In any event, more about the Great Wall of Qingdao here:
It is a fake wall which you can see in some parts of the wall that have fallen apart, though it's not obvious in these photos. You can, however, see what looks like water streaming down this rocky cliff-esque wall. It's just paint. Paint they need to touch up. But down those "streams" is where you will find people - men and women in dress shoes no less - risking life and limb to get down the wall to the bus stop. It boggles my mind! 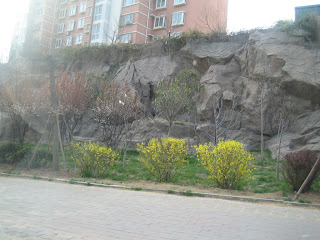 Here's another shot where you can see how rugged the wall is. If you fell off that, it would totally fucking suck. You probably wouldn't die...unless you hit your head hard enough. But still! How dumb do you have to be to risk severely injuring yourself to catch a bus?!? And shame on the city and apartment complex planners. They should have put in stairs or something so the residents could get to the bus easily. Morons. 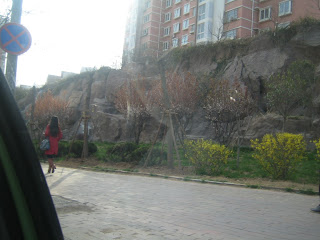 Here's one last photo where you can see the size of the wall in comparison to some lady walking by it.

And now, I will remain vigilant in my attempts to photograph some crazy soul as they descend this man-made catastrophe in the making. I'll update this post if I can catch it! Stay tuned!
Posted by JQ at 9:18 PM

Email ThisBlogThis!Share to TwitterShare to FacebookShare to Pinterest
Labels: Weirdos