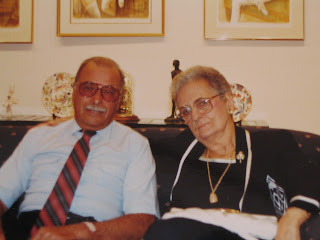 Not one day goes by where I don't miss the ones I love who have left this world behind. Grandpa was one of a kind...a funny kind. He'd be so proud of me zinging his old joke in there like that too.


I'm sure some of you will read the title of this post and think that it implies something shady, like that Grandpa's getting some side action or some let's-not-go-there territory. And if that is what you're hoping this is about, then you're out of luck. For this post is in loving memory of my grandpa on my mom's side, Seymour, who we just called "Grandpa." We called our dad's father "Papa" to distinguish our grandfathers. Papa was a great man too and I think about him often, but something happened recently that got me thinking about Grandpa. I just had to share it with my husband. And now I'm sharing it with you too.

You should also know that Grandma was an outstanding cook. She made the most amazing things from scratch. I don't even know if I could duplicate it. Grandma was known for her kick-ass desserts. They were absolute heaven. Her meals were sensational but we ALL lived for dessert.  Grandma took great pride in presentation. When she'd slice up her decadent chocolate pie, we'd all crowd around, drooling, hoping to be the one to get the first piece.

Unless that piece, which more often than not when it came to the removal of that first piece, flopped out onto the plate like a dead and bloated fish trying to escape out of the chum bucket with one last thrash. Despite that it was from the same pie, because this piece looked like what would actually happen when shit hit the fan, my brother and I would refuse to eat it. We wanted a pretty piece. That's where Grandpa came in. Grandpa didn't mind the messy piece. Because he wound up always getting these wonky-looking slices of cake and pie, we began calling them "The Grandpa Piece."

I had shared this bit of family history with Lane who finds it funny, knowing how his wife and his brother-in-law get along, to imagine us as children behaving this way. Lane is much like Grandpa too in that he'll gladly take something that looks like it hit the floor so I can have the one that looks like it didn't. He's a good sport, just like Grandpa was. Since my husband now knows that he's responsible for eating "The Grandpa Piece," he plays along during these moments. Technically, he should have eaten this whole cake: 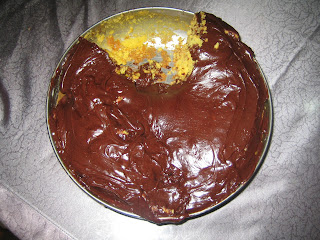 Grandma NEVER would have had a cake turn out looking like this. NEVER! Only "The Grandpa Piece" would look like this. But to my credit, my ugly cake tasted beautifully. Grandma would have criticized the way this cake looks. But Grandpa would have been full of praise because, despite being hideous, it was absolutely delicious. They were such opposites I still have no idea how they wound up together. Perhaps their opposing forces canceled each other out and that's what made them work. Or, perhaps it was Grandpa's willingness to eat the ugly, messy pieces in life that did the trick.

The winter holidays have always made me miss family. Ever since they left this world, I miss both sets of grandparents. And of course, I miss my mom. But now that I live on the upside down side of the world, I miss my family. And my friends. For me, a great distraction from those I'm missing is to get cooking. And Christmas time wouldn't be the same without gobs of horribly delicious baked goods. Lane and I have been invited to a Christmas party which we're looking forward to. Immediately, I knew what I'd make. This chocolate lava cake that you can make in your rice cooker. Yes, really! Look at it. It looks amazing! Of course, while I do hope mine will come out looking as lovely as the one you see there, I am more inclined to believe that, given my history, mine will come out looking like the cake I posted above. I will document this endeavor and perhaps we will all be proud of my kitchen prowess. Or, I will have created another giant Grandpa Piece that I hope everyone will be happy to help eat.
Posted by JQ at 4:04 AM